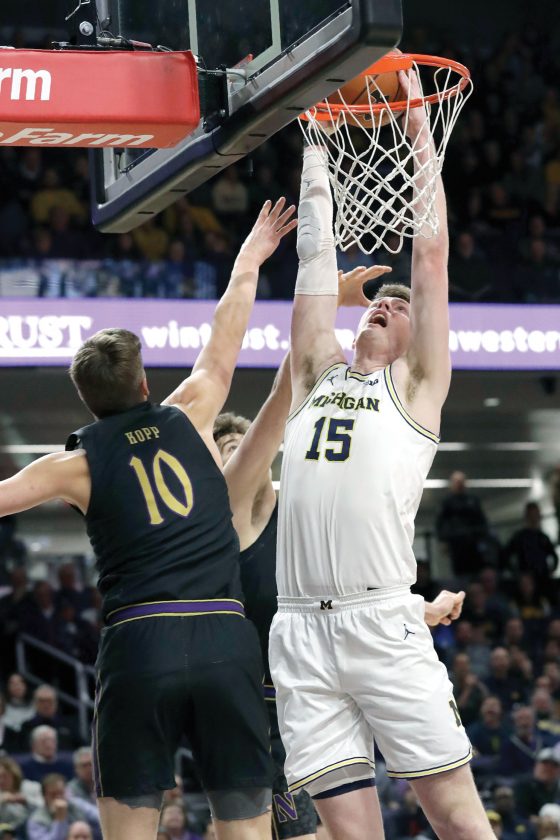 EVANSTON, Ill. (AP) — Juwan Howard noticed the sea of maize and blue as he scanned the crowd during the national anthem. He had friends and relatives behind the bench, and former teammate Dikembe Mutombo was on hand, too.

It was quite a night for Howard, particularly with Michigan picking up a victory.

“Something about Chicago air,” he said. “I love Chicago air. This is where I grew up. Once I got off the plane, I smelled it. I was like, ‘Ahh, ahh. I’m home.'”

Howard is from the city’s South Side. And his first game coaching the Wolverines (15-9, 6-7 Big Ten) in the Chicago area turned into a rather lopsided affair.

Michigan took control in the first half, withstood a minor push in the second and came away with a rather easy victory.

Brooks nailed four 3-pointers, including a momentum stopper after Northwestern cut a 23-point lead in the second half to 12. Livers played 30 minutes and made all seven free throws in his second game back after missing nine of 10 with a groin injury. And Michigan won for the fourth time in five games since losing four straight.

“I hate to say it,” Livers said. “It’s always that Michigan tradition — Michigan being that second-half-of-a-season team. I hate it. But right now, I have to love it because it’s definitely gonna help us make our run through the Big Ten Tournament and try to punch that ticket to March Madness.”

Last-place Northwestern (6-17, 1-12) dropped its eighth in a row and lost for the 13th time in 14 games. Jared Jones (12 points) and Miller Kopp (10) were the only players in double figures for the Wildcats.

Near the bottom of the Big Ten after an impressive non-conference start, the Wolverines hope to make a push down the stretch. They made it look easy against Northwestern once they found their rhythm.

The Wolverines will look to stay on a roll when they host Indiana on Sunday.

PITTSBURGH (AP) — Niko Goodrum drove in five runs, two on a double in a big 11th inning that sent the Detroit ...

IRON MOUNTAIN — The 2020 U.P. Football All-Star Game was originally scheduled for June 27, at the Superior Dome ...