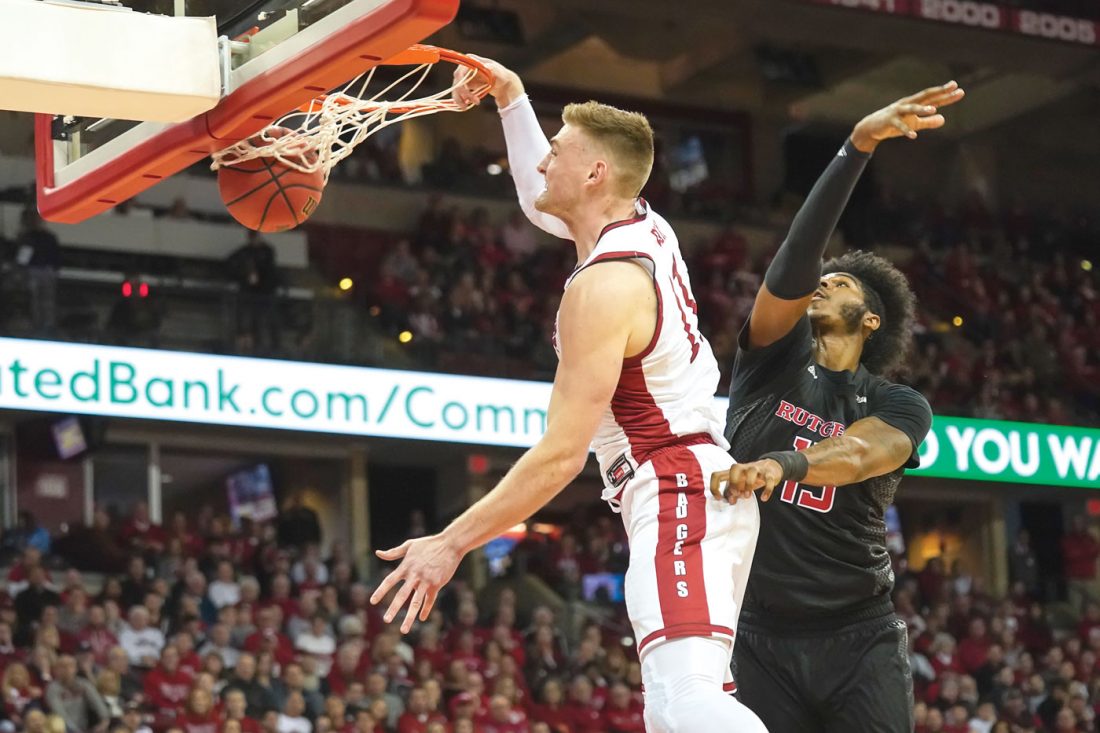 He made sure to leave an impression on the Scarlet Knights Sunday, coming off the bench to score 18 points and grab nine rebounds in a 79-71 Wisconsin win.

With the Ohio State transfer having to out that Dec. 11 game at Rutgers, the Badgers (17-10, 10-6 Big Ten) lost the rebounding battle 40-26. But with the 6-foot-10 forward in the lineup, it gave Wisconsin another big to throw at a physical Rutgers lineup. And Potter hitting 4-of-5 3-point attempts forced Rutgers to extend its defense.

Potter said he came into the game with the goal of bringing more physicality for the Badgers, who were only outrebounded 32-30 this time.

Potter was an effective complement in the post for starter Nate Reuvers, who scored 17 points and knocked down a 3 as well. Brevin Pritzl also scored 17.

“That’s a big piece of playing a team that’s so physical and jams things up,” Wisconsin coach Greg Gard said of his team’s ability to get to the line.

The Badgers were hot from distance, hitting 10 of their first 20 from behind the 3-point line, and back-to-back Potter 3s put them up 58-42 midway through the second half. But Rutgers went on a 12-3 run with Myles Johnson’s dunk pulling the Scarlet Knights within seven with less than seven minutes left.

Ron Harper Jr. later hit a long 3 to cut the lead to 70-64. But over the next three Wisconsin possessions, D’Mitrik Trice went 3 for 4 from the line and knocked down a baseline jumper as the shot clock expired. He then drew a charge from Geo Baker, and the Badgers held on for the win.

Harper led the Scarlet Knights with 21 points and nine rebounds. Meanwhile, Baker scored 16 for Rutgers, pushing him past the 1,000-point mark for his career.

Most of the Big Ten has struggled on the road this season. But it’s been especially stark for Rutgers, which only has one road win, but is 17-1 at home.

“We’re young,” said Rutgers coach Steve Pikiell. “We’ll have a chance if we keep playing like this and keep fighting through the obstacles this league brings to you, especially when you travel on the road.”

Reuvers came to the media room sporting a red T-shirt with a picture of Gard on the front along with the coach’s name and the nickname “silent assassin.” Reuvers said he had to have the shirt the second he saw it. “Coach Gard is a killer,” Reuvers said. Gard told reporters he had nothing to do with the shirt, but the team managers already had donned theirs at practice and some players who hadn’t received theirs in the mail yet had complained about it. A sportswriter tweeted the nickname Jan. 14 as the Badgers beat Maryland 56-54. “It’s comic relief for somebody,” Gard said.

The Scarlet Knights have two of their last three away from The RAC to finish the season. It’s been one of the best seasons for the Scarlet Knights in years. But another road win would do wonders to beef up their resume. Their last chances will be at Penn State and Purdue.

Wisconsin, a team that started the season 5-5 is now in a logjam for second place in the conference headed into the final four games of its conference schedule.

Wisconsin travels to Michigan on Thursday.