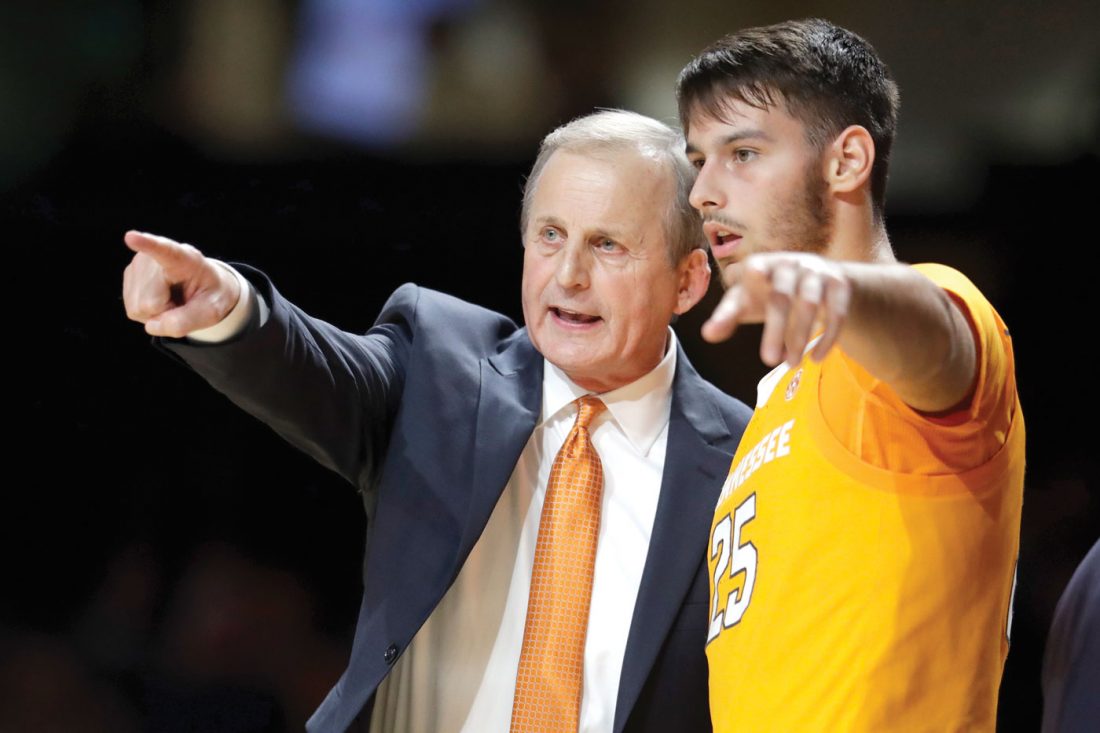 AP Photo Tennessee coach Rick Barnes talks with guard Santiago Vescovi, of Uruguay, during the second half of the team's game against Vanderbilt in January. Tennessee’s men’s basketball team has players from France, Serbia, Uruguay and Finland.

SAN FRANCISCO (AP) — Morgan Coppoc finds herself in a situation similar to so many other college athletes across the country, hundreds of miles away from campus and lost without her routine and her tennis teammates at Georgia.

Still, she is regularly hearing from her coaches for individual check-ins as well as receiving updates for the entire team, including the latest details about the coronavirus pandemic. The school counseling office also keeps in contact with Coppoc at home in Tulsa, Oklahoma, to offer sessions by phone that she would have typically attended in person.

“This whole situation has been hard to process and still feels so surreal,” Coppoc said. “I have been experiencing many emotions across the spectrum. First, I was in denial. It was impossible to accept the gravity of what was happening. I even refused to unpack my clothes once I was back home in Oklahoma. I was scared. Now I’m 13 hours from campus and my closest friends, teammates and coaches.”

Leaders in college athletics are doing their best to adapt in real time to help athletes like Coppoc. Coaches are making efforts to keep teams emotionally close when they’ve suddenly been scattered across the country — and in many cases the world. Regular video calls and group texts have replaced face-to-face interactions as they embrace new ways to help young athletes cope with a crisis that has also taken away the sports they loved, the very thing that defined many of them.

Coppoc’s coach at Georgia, Jeff Wallace, reached out recently on the team’s group chat platform. “I just said something like, ‘Hope everyone’s doing well, staying safe, life as we know it has changed dramatically’ and encouraged everybody to keep working out, hydrate, get your rest and practice social distancing,” Wallace said.

“Never thought I would advise anyone to stay away from others. And ‘if anyone needs anything or has any questions, please reach out.’ Finally, ‘It would be great to hear how, what everyone is doing in short periodical updates, that would be awesome.'”

At Arkansas, men’s basketball coach Eric Musselman and his counterparts in other sports are keeping tabs on every student-athlete through a detailed spreadsheet.

“I think for all of us in college athletics the No. 1 focus always has to be on the student’s well-being,” Musselman said. “All coaches in every sport want to win, but the bottom line in all of this is these guys are 17- to 21-year-olds in a prime part of their lives when they’re still trying to figure out the world. We have an obligation, whether in season, out of season, or post-playing career remaining a big part of their lives, being there for them.”

Musselman has always counted on impromptu, in-person opportunities to get a read on how someone is doing.

“That’s why we’re FaceTiming a lot so we can look in their eyes. The biggest thing I’m missing is even in the offseason they come up and sit on the couch in my office,” Musselman said. “That interaction is gone and that’s probably the most vital interaction we have all year.”

Communication specialists and mental health professionals are encouraging coaches and others to allow these young men and women to go through the stages of grieving as needed as they adjust after the unexpected disappearance of the seasons they trained for and the camaraderie of daily practices and team meals. Providing comfort and security is important to ensure people know where to turn for a sense of some normalcy.

“That’s general human nature but I think it is heightened with young people,” said Rick Dickson, the former Tulane athletic director who guided the school’s athletic department through the aftermath of Hurricane Katrina in 2005. “They’re so invested, especially in sport, their time, their commitment, their passion, all of that, and when that is rocked to the core, they need the certainty and stability they can turn to and depend on. That’s their source for so many things.”

Dickson scrambled his 16 teams after the hurricane to four other campuses for a semester so they could stay safe — three spots in Texas and at LSU. He set up a task force in each location and regular mental-health checks on the athletes and coaches.

It cannot be a “one-time here’s what we’re going to do,” he said.

Dickson also shared his experiences with the NCAA as it established guidelines on mental health and moving forward when things change by the minute.

Betsy Butterick, a San Diego-based communication specialist and a former college basketball player and coach, recently held a free webinar to help coaches and administrators develop strategies for the days ahead. She encouraged the roughly 500 participants to identify forms of self-care and how that looks for each person and noted “when in doubt, start with gratitude.”

With the absence of traditional senior sendoffs or end-of-season banquets that allow everyone to be together perhaps one final time, she said coaches can get creative: establish new team awards, hold virtual celebrations.

“It is very similar to grieving,” said longtime University of San Francisco baseball coach Nino Giarratano. “We are in contact daily trying to help them academically, athletically and keeping their spirits up.”