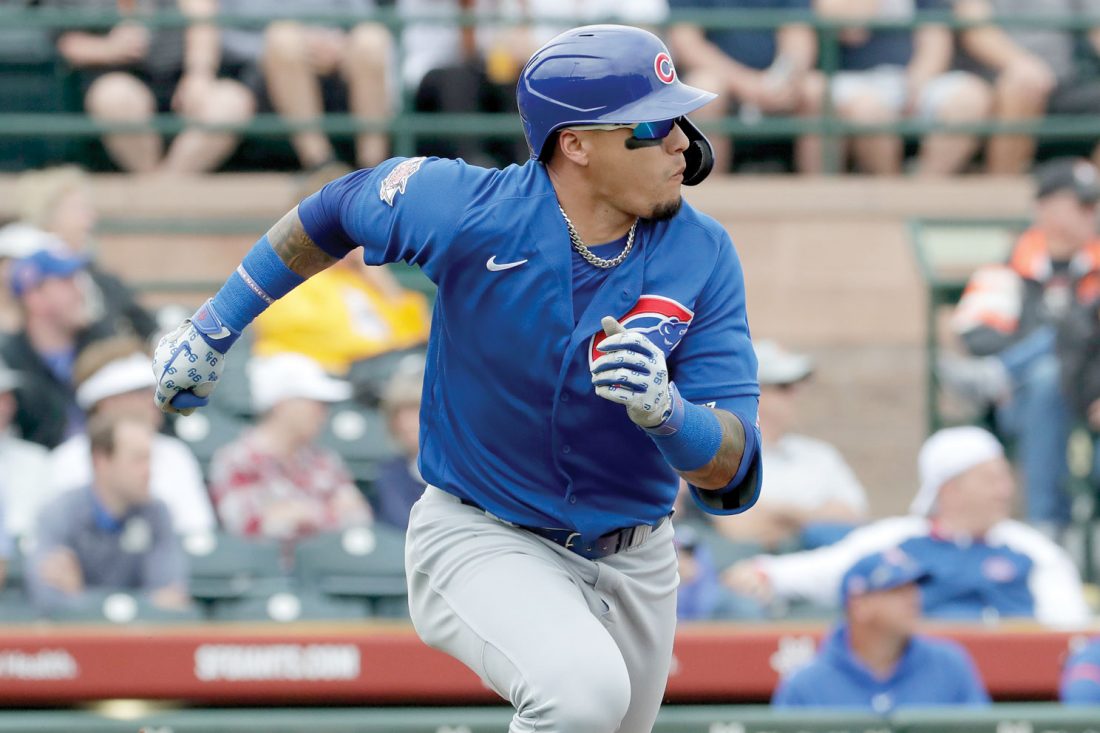 AP Photo Chicago’s Javier Baez runs out a two RBI double during the second inning of a spring training game against the San Francisco Giants Tuesday in Scottsdale, Ariz. The Cubs won 16-3.

NEW YORK (AP) — If Major League Baseball can’t play in front of fans at a team’s home ballpark because of the virus outbreak, the sport’s first preference likely would be to switch games to the visiting team’s stadium if possible, a person familiar with the deliberations told The Associated Press.

The person spoke on condition of anonymity Tuesday because no decisions have been made.

MLB starts its season on March 26. Among the games on opening day is Texas at Seattle — the Seattle area has been hit hard by the virus, with 24 deaths.

MLB anticipates government officials will decide whether it is safe to play in front of fans in each city. If changes to the schedule are necessary, MLB would make determinations at the point when a ballpark has been ruled out.

Washington Gov. Jay Inslee plans to ban gatherings and events of more than 250 people in virtually the entire Seattle area, a person familiar with the decision told The Associated Press on Tuesday night. The person was not authorized to disclose the decision and spoke on condition of anonymity.

Inslee scheduled a news conference for late Wednesday morning. The Mariners and MLB had no immediate comment.

Baseball’s preference is to play in front of fans and not in empty stadiums, the person familiar with the deliberations said. Players and management don’t like the lack of energy in empty ballparks.

Flipping home and road dates is easier to do at the start of the season, when there are many series between teams who face each other later in the year.

The Rangers are scheduled to open Globe Life Field, their new retractable roof ballpark, against the Los Angeles Angels on March 31. Texas general manager Jon Daniels said Monday there hadn’t been any discussion with MLB or the Mariners about swapping home dates for that opening series between AL West rivals, but said the new ballpark would be ready if it is needed.

Exhibition games against St. Louis are scheduled at the new stadium on March 23 and 24.

Rangers catcher Robinson Chirinos said Tuesday he is “a little bit” concerned about traveling to face the Mariners.

“I know the season starts in Seattle, and we know how Seattle is right now,” Chirinos said.

Several high-profile soccer games in Europe have been played in empty stadiums, including Atalanta’s win at Spain’s Valencia on Tuesday night that advanced the Italian club to the Champions League semifinals. Paris Saint-Germain’s home match against Germany’s Borussia Dortmund on Wednesday night also will be behind closed doors.

All Spanish first- and second-division league matches will be played without fans for the next two weeks. After some Serie A games were played in empty stadiums in recent weeks, the Italian government called off all sporting events until April 3.

Matthew Boyd, working on a curveball to go with his fastball and slider, worked into the fifth inning in his longest outing of the spring. He allowed a run on three hits and a walk and struck out five over 4 1/3 innings. C.J. Cron, Jeimer Candelario and Cameron Maybin homered for Detroit.

Derek Holland worked 5 1/3 innings in the start for the Pirates, allowing three home runs but striking out six. JT Riddle singled and tripled.

Brad Keller got through four innings, giving up a run on five hits and a walk while striking out three. Ian Kennedy worked two perfect innings of relief. Ryan O’Hearn drove in two runs with a double and homer.

Javier Baez and Willson Contreras each got three hits, including a home run, and Ian Happ drove in three runs. Tyler Chatwood did not allow a run over 3 2/3 innings for Chicago.