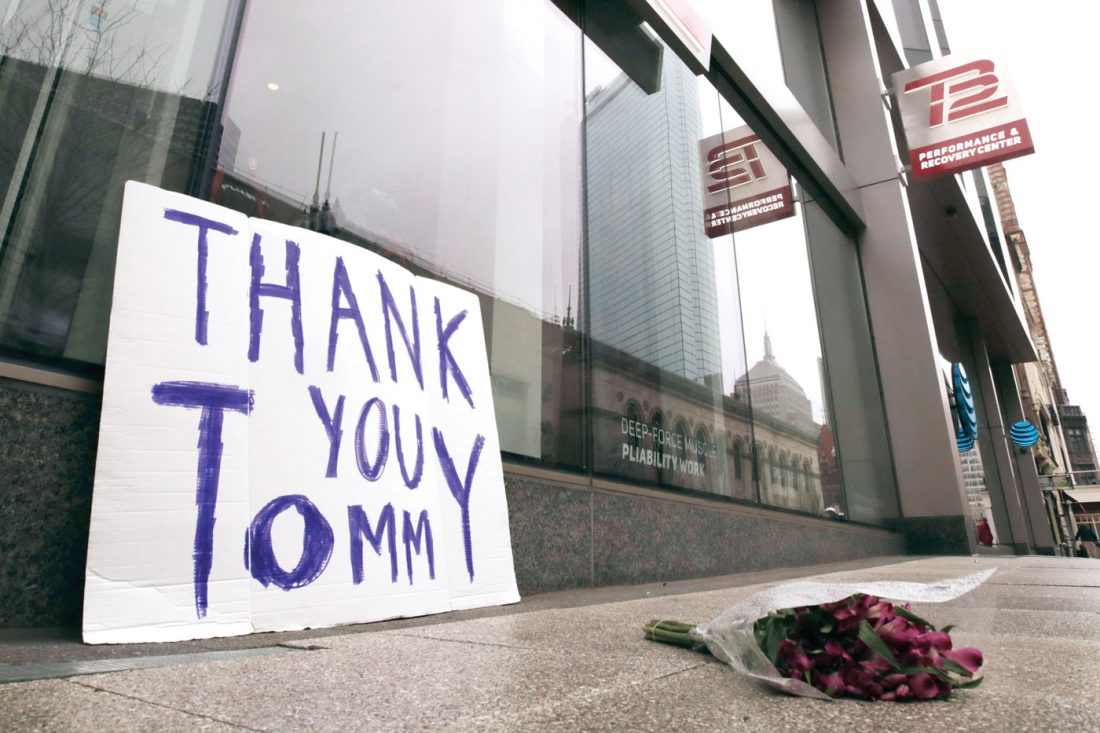 AP Photo A bouquet of flowers and a sign thanking former New England Patriots quarterback Tom Brady, who announced he was leaving the football team, rest on the sidewalk outside the TB12 training center in Boston, Tuesday.

The NFL is considering delaying the approval of free agent deals being made the last two days because of a lack of signed contracts.

A person familiar with the discussions on Tuesday night tells The Associated Press that due to free agents not being able to travel and actually sign agreements, which is league policy, the deals might not be confirmed by teams Wednesday when the NFL’s business season begins. The person spoke on condition of anonymity because such discussions are not made public.

The league has banned travel for players and team personnel as a safeguard against the new coronavirus, and has advised clubs that physical exams can only be taken locally by free agents who reach deals.

Dozens of agreements have been reached Monday and Tuesday in what’s known as the approved tampering period. Players’ representatives have been allowed to negotiate with teams, though nothing official can be done until 4 p.m. EDT on Wednesday.

Now, that could be delayed.

Earlier Tuesday, the unimaginable happened to Patriots fans: Tom Brady is moving on. His representatives were in serious contract talks with Tampa Bay.

No matter what else happens in NFL free agency, decisions by those two iconic quarterbacks deserve headlines. And those decisions were as divergent as the regions they have played in.

Brady will be 43 when the next NFL season begins. He also brings with him six Super Bowl rings, four Super Bowl MVP trophies and three regular-season MVP awards. Simply put, he’s the most successful quarterback in pro football history.

“I don’t know what my football future holds, but it is time for me to open a new stage for my life and my career,” he wrote. “Although my football journey will take place elsewhere, I appreciate everything that we have achieved and am grateful for our incredible TEAM experiences.”

Those experiences — nine Super Bowl trips, six wins — ended with a home loss to Tennessee in the wild-card round in January.

As a memento for Patriots owner Robert Kraft, who referred to Brady as being like a son, the team will take a $13.5 million salary cap hit because of the signing bonus Brady got for his one-year deal for the 2019 season.

No such issues in the Big Easy. Brees made things, well, easy for the Saints, making it clear he wasn’t leaving New Orleans or Sean Payton’s offense despite having his contract run out.

The 19-year veteran with one NFL title in New Orleans basically gave a hometown discount to the Saints. His deal will not put him in the top 10 quarterbacks for annual salary. But the career leader in completions with 6,867, yards passing with 77,416, and touchdowns with 547 believes New Orleans offers the best place for him to win another championship.

Another veteran QB found his landing spot when Philip Rivers agreed to join the Colts. Rivers spent the past 16 seasons with the Chargers, first in San Diego and then in Los Angeles.

And one more star passer, Cam Newton, will be departing Carolina. Panthers general manager Marty Hurney said Tuesday on Twitter that “every year difficult decisions are made and they are never easy.” The team moved quickly to find a replacement, agreeing to a three-year, $63 million deal with free agent Teddy Bridgewater, a person familiar with the negotiations told the AP.

Newton, the 2015 NFL MVP, said on social media he didn’t ask for the trade, telling the Panthers: “You forced me into this.”