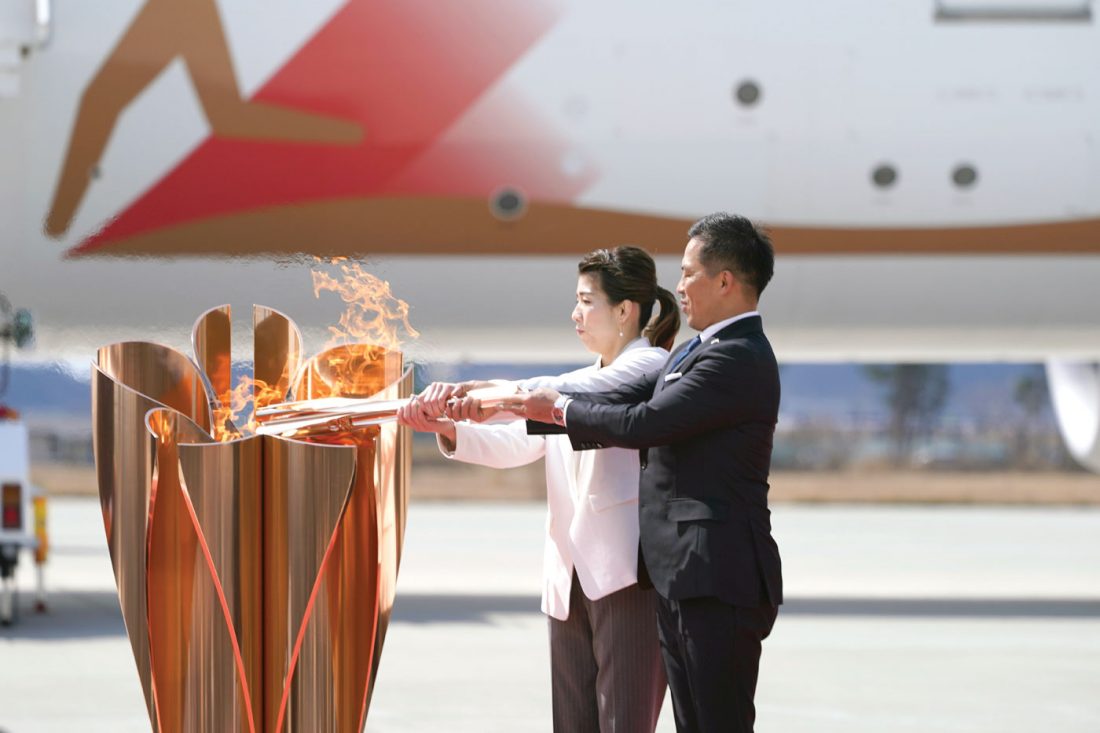 MATSUSHIMA AIR BASE, Japan (AP) — The Olympic flame on Friday completed its difficult journey from Greece to Japan.

That signified a small, symbolic victory for the IOC and local organizers, who maintain the Tokyo Olympics will open on July 24 amid a chorus of doubters who believe they should be postponed or canceled because of the coronavirus pandemic.

“For the first time in 56 years, the Olympic torch is heading to Tokyo and I hope that the Olympic torch will illuminate the path of hope for many people,” organizing committee President Yoshiro Mori said at a scaled-down arrival ceremony at an airbase in northern Japan.

Mori, of course, was referring to Tokyo’s famous 1964 Olympics. Tokyo was also to have been the venue for the 1940 Olympics, which were canceled by World War II.

“We will work closely with the International Olympic Committee, the Japanese government, and the Tokyo Metropolitan Government,” he said, and based on the World Health Organization’s advice, “we will ensure a safe and secure games.”

The flame, carried in a tiny canister from Greece, reached Japan aboard a white aircraft painted with the inscription “Tokyo 2020 Olympic Torch Relay” along its side. The tail section was adorned with the refrain “Hope Lights our Way.

The aircraft was welcomed on the tarmac by a small contingent of organizing committee officials. Two of Japan’s most famous Olympians — three-time wrestling gold medalist Saori Yoshida and three-time judo gold medalist Tadahiro Nomura — received the flame for the lighting ceremony.

The two climbed portable stairs and entered the aircraft before emerging holding the cradle-like canister with a flame burning inside. They handed it over at the base of the stairs to Mori, who delivered a brief acceptance speech in a gusting wind.

Yoshida and Nomura then took the torch and ignited a large cauldron on the tarmac of the airbase.

Mori referred to the “difficult situation” with the virus and then thanked the IOC and Greek officials that the “hand-over ceremony was able to be held” with the Olympics set to open in just over four months.

The flame arrived in the northeastern part of Japan, roughly 250 kilometers (150 miles) from Tokyo, that was devastated by the 2011 earthquake, tsunami and meltdown of three nuclear reactors that has left many still living in temporary quarters.

The flame will stay in northern Japan for almost a week until the torch relay begins officially on March 26 from Fukushima prefecture. It will be put on public display in the three prefectures most affected by the disaster — Miyagi, Iwate and Fukushima, Even if the Olympics and Paralympics don’t start as scheduled, the burning flame could be used as a symbol and a rallying point for the Japanese public.

In a conference call on Wednesday, IOC President Thomas Bach got support for holding course, but is also getting push back from athletes who can’t train, are confused about the qualification process, and worry about their health. Critics are also complaining about the unfairness of qualifying, which might give some athletes advantages over others.

The Japanese news agency Kyodo released a survey on Monday showing 69.9% of those questioned did not believe the Olympics will open as scheduled.