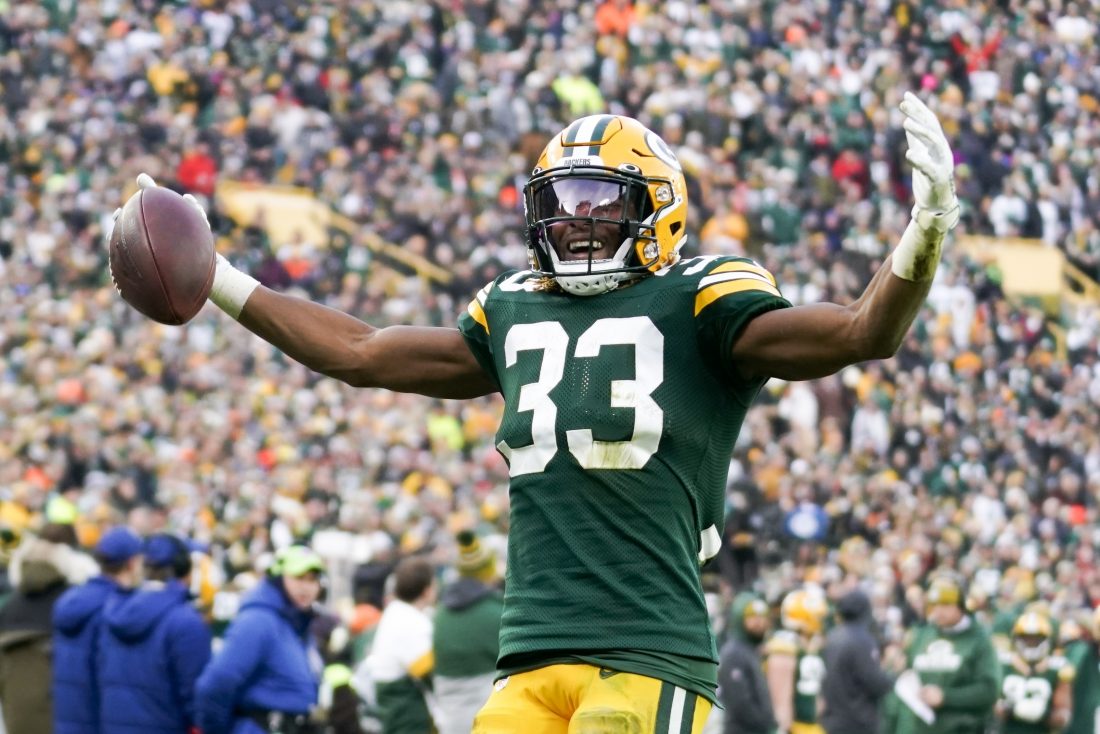 Green Bay Packers' Aaron Jones reacts after his first down run during the second half of a game against the Washington Redskins, in Green Bay, Wis On Dec. 8. (AP Photo/Morry Gash, File)

Packers running back Aaron Jones says he wants to remain in Green Bay for his entire career and that he won’t let speculation about his future distract him as he enters the final season of his contract.

The Packers drafted Boston College running back A.J. Dillon in the second round last month, a move that raised questions about Jones’ long-term future with the franchise.

“It’s not that I’m surprised or anything,” Jones said Wednesday during a Zoom session with reporters. “It’s the NFL, and you never know what can happen.”

Jones said he won’t need his contract status to provide any extra motivation in following up a breakthrough season that ended one game shy of the Super Bowl.

The 2017 fifth-round draft pick from UTEP tied Tennessee’s Derrick Henry for the NFL lead in touchdown runs (16). He matched Carolina’s All-Pro running back Christian McCaffrey for first place in total touchdowns (19) last season. He was the first Packer to rank No. 1 in the NFL in either touchdown runs or total touchdowns since Jim Taylor in 1962.

Jones, who also caught 49 passes last year, became the second Packer to gain 1,500 yards from scrimmage and score 19-plus touchdowns in the same season. Ahman Green accomplished it in 2003.

“I’m really not looking at the market,” Jones said. “I’m just focused on myself. I feel like I can play at a really high and elite level for a very long time. I’m just going to do what I can and hopefully that leads to me being a Packer for life. That’s my goal.”

Jones has many other things on his mind as he adjusts to fatherhood during a pandemic. Jones’ girlfriend gave birth to a son, Aaron Jones Jr., on April 17.

So his son can get in workouts, Jones’ dad put together a makeshift gym by putting some yoga mats, dumbbells, resistance bands and other equipment in the garage of their home in El Paso, Texas.

Jones is exchanging text messages with Dillon and getting to know his new teammate in a backfield that also features Jamaal Williams, who enters the final year of his contract after rushing for at least 460 yards each of the last three seasons.

Jones goes to an old sports standby about his contract status and long-term future.