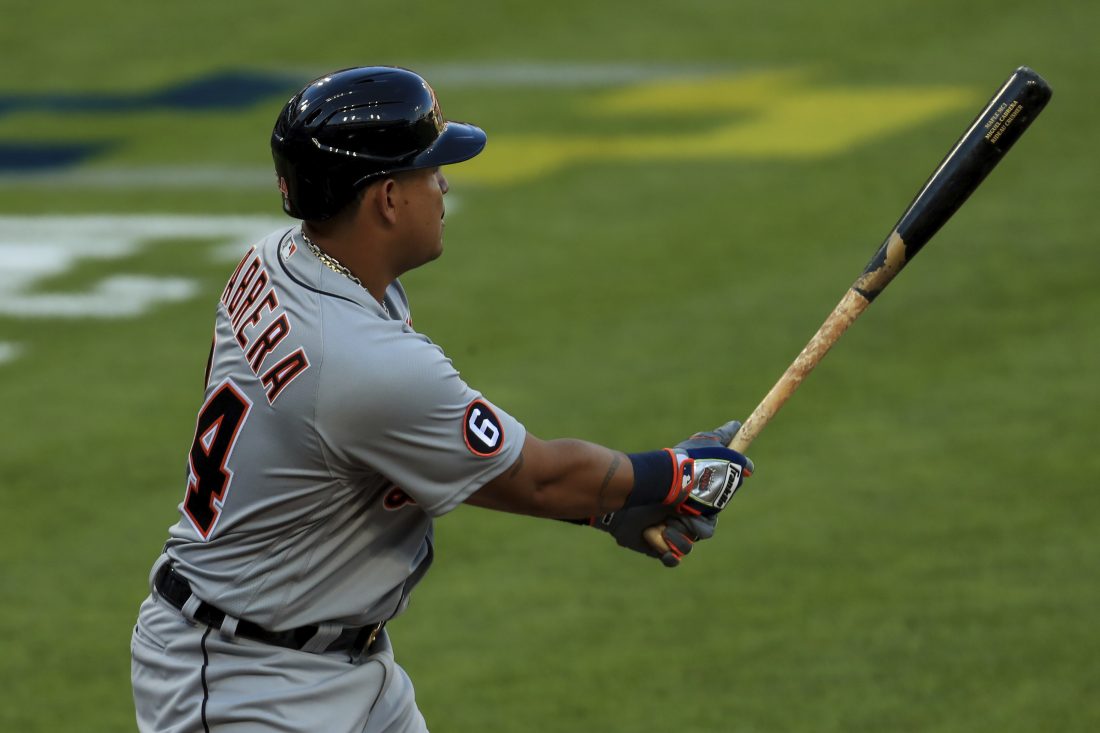 CINCINNATI (AP) — C.J. Cron hit a tiebreaking two-run homer in the ninth inning, and the Detroit Tigers got to Cincinnati’s bullpen for the second straight day in a 3-2 victory over the Reds on Sunday.

Miguel Cabrera led off with a 10-pitch walk before Cron connected against Michael Lorenzen (0-1), sending an opposite-field drive deep to right.

“Those guys — (Cron) and (Jonathan Schoop) and Miggy– they’re run-producers,” Detroit manager Ron Gardenhite said. “They’re legit. When they’re looking for a pitch and get it, they hit it a long way. It’s all about coming up big in big moments.”

The Reds got one back when Freddy Galvis and Aristides Aquino opened the bottom half with consecutive doubles. Aquino advanced to third on Curt Casali’s fly ball to center, but Joe Jiménez got Joey Votto to bounce into a game-ending double play for his second save in two days.

José Cisneros (1-0) pitched the eighth for the win.

Cincinnati played without second baseman Mike Moustakas and center fielder Nick Senzel after each player was scratched. Moustakas was placed on the injured list because he wasn’t feeling well, according to manager David Bell. Senzel also reported feeling sick.

The moves came a day after Reds infielder Matt Davidson went on the injured list because he tested positive for the coronavirus.

Luis Castillo struck out 11 and handed a 3-1 lead over to Cincinnati’s bullpen on Saturday. But Robert Stephenson, Lorenzen and Raisel Iglesias allowed home runs in what became a 6-4 victory for the Tigers.

“Just losing games is tough, no matter what the situation is or what’s gong on,” he said.

Cron also went deep in Detroit’s 7-1 loss on opening day, making a nice first impression after signing with the Tigers in free agency.

The Tigers jumped in front in the series finale on Niko Goodrum’s third-inning homer. But Votto responded with a tying RBI single in the fifth.

Spencer Turnbull pitched five effective innings for Detroit in his first start since he went 3-17 with a 4.61 ERA last season. He struck out eight and issued four walks.

Tigers: RHP Michael Fulmer makes his first appearance since Sept. 25, 2018, in a start against Kansas City on Monday. The 2016 AL Rookie of the Year underwent Tommy John surgery in March 2019.

On Saturday, Miguel Cabrera passed two superstars with a homer Saturday night, and JaCoby Jones hit a two-run shot in the ninth off Raisel Iglesias, rallying the Detroit Tigers to a 6-4 victory over the Cincinnati Reds.

Cabrera salvaged his four-strikeout day with a seventh-inning, two-run home run that lifted Detroit to a brief 4-3 lead and broke a tie with Adrian Beltre for 30th place on the career home run list.

Cabrera now has 478. Hall-of-Famer Lou Gehrig and Fred McGriff are tied for 28th with 493 each.

The two RBIs boosted Cabrera past Hall-of-Famer Cal Ripken Jr. and into 25th place on the career RBI list with 1,696. He needs three to tie another Hall-of-Fame inductee, Jim Thome.

Reds starter Luis Castillo reached double figures in strikeouts for the 10th time in his four-year career, fanning 11, including Cabrera swinging all three times in three appearances. The 2019 All-Star allowed six hits and one run with one walk in six innings.“I wasn’t trying to strike him out but I’m happy to strike Cabrera out three times,” Castillo said. “He is one of the best hitters in the big leagues.”