The Detroit Tigers’ Miguel Cabrera watches his 500th career home run in the sixth inning against the Blue Jays in Toronto on Sunday. (Jon Blacker/The Canadian Press via AP)

TORONTO — Miguel Cabrera’s 500th career homer was a big moment for everyone who had a hand in the slugger’s stellar career.

Even on the road, it was a big party.

Cabrera became the 28th major leaguer to hit 500 home runs, and the Detroit Tigers beat the Toronto Blue Jays 5-3 in 11 innings on Sunday.

Daz Cameron and Willi Castro each hit an RBI double in the 11th to help Detroit take two of three in the weekend series.

The 38-year-old Cabrera connected on a 1-1 pitch from left-hander Steven Matz in the sixth, sending the ball over the scoreboard in right-center field. Measured at 400 feet, the homer tied it at 1.

Cabrera is the first Venezuelan to hit 500 homers.

“It’s something special for my country, for my family, to be able to do this,” he said. “I’m really happy.”

Much of the crowd of 14,685 at Rogers Centre rose for a standing ovation as Cabrera rounded the bases. After celebrating with his teammates, he came out to accept a curtain call, taking off his helmet and bowing to the fans behind the first-base dugout.

“It came in a pivotal moment and it came in a team win,” Tigers manager A.J. Hinch said. “You couldn’t have scripted it much better.”

Jeimer Candelario, who was on deck, was the first teammate to celebrate with Cabrera.

Soto (6-3) worked two innings for the win, and Joe Jimenez got three outs for his first save in two chances. 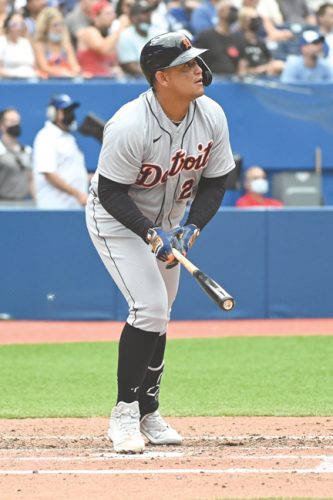