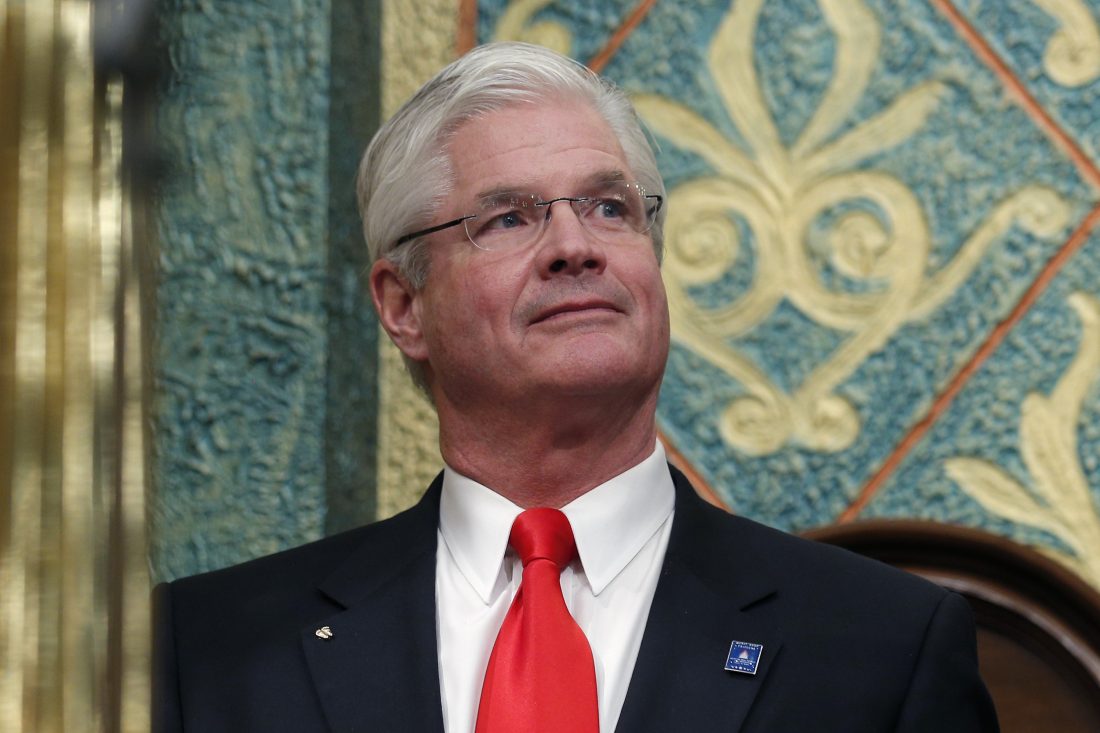 In this Feb. 12, 2019, file photo, state Senate Majority Leader Mike Shirkey, R-Clarklake, watches during the State of the State address at the state Capitol in Lansing. Michigan lawmakers plan to convene for the first time in weeks to lengthen Gov. Gretchen Whitmer's emergency declaration amid the coronavirus pandemic but are at odds over the extension and whether the session is even necessary. The Republican-led Legislature is scheduled to meet Tuesday, three weeks after last voting. Shirkey's spokeswoman said “He thinks we can come to some middle ground in terms of the extension, and that doesn't preclude it from being extended again if were necessary at some point.” (AP photo)

LANSING, Mich. (AP) — Michigan lawmakers plan to convene for the first time in weeks to lengthen Gov. Gretchen Whitmer’s emergency declaration amid the coronavirus pandemic but are at odds over the extension and whether the session is even necessary.

The Republican-led Legislature is scheduled to meet Tuesday, three weeks after last voting. Since then, one legislator has died from a suspected COVID-19 infection and another has tested positive, causing uneasiness over congregating in the Capitol.

Stretching Whitmer’s emergency is important because the original declaration ‚Äî set to expire Tuesday after 28 days ‚Äî is the basis for nearly 30 subsequent executive orders, including those telling people to stay home and closing schools and businesses.

Complicating the issue is that Whitmer last week rescinded her emergency declaration and replaced it with one that also includes an initial disaster declaration. Democrats said the disaster designation means the 28-day clock resets and there is no reason to meet until late April, especially when the virus outbreak is not subsiding.

Michigan had more than 14,200 confirmed coronavirus cases as of Saturday and at least 540 related deaths.

“For us to come in a week after we lost a rep, when the death count keeps climbing, the number of cases is really climbing … it’s just not the time to come in to the Legislature unless it’s absolutely necessary. It is not absolutely necessary,” House Democratic Leader Christine Greig of Farmington Hills said during an interview.

Republicans countered that under Democrats’ interpretation, a governor could revise and reissue declarations in perpetuity, rendering meaningless a 1976 law that requires legislative authorization to lengthen emergencies and disasters.

“The governor’s declaration will expire on April 7th, and it is our responsibility to consider an extension,” House Speaker Lee Chatfield of Levering wrote to Greig on Saturday after she had sent him a letter outlining her concerns. “Doing so until May 1st will allow the governor to continue her important work while still giving local residents hope that they will have a real plan presented to them sooner than the end of June.”

Another complexity is that a 1945 law, also cited in Whitmer’s declarations and orders, gives a governor broad powers to unilaterally declare an emergency and when it has ended ‚Äî without any legislative oversight.

Whitmer said that she had implored legislators not to gather this week because her new declarations made it unnecessary. She later clarified that they should approve a 70-day extension, noting the Legislature had extended a state of emergency for longer over Flint’s water crisis in 2016 and a Detroit-area sinkhole in 2017. The one in Flint lasted more than seven months.

“People are dying in our state. It’s important that we continue to have the protections for our health care workers, and that all depends on extending this emergency,” Whitmer said. “I ask that the Legislature think very seriously about embracing this 70-day extension. It doesn’t mean it’s embracing a 70-day extension for every other order that I’ve issued.”

GOP lawmakers instead support revisiting the length of the declaration every few weeks.

“We know there have been other states of emergency of a similar time span requested and granted ‚Äî the difference being that the circumstances of those emergencies were vastly different than what we’re dealing with in this situation where we’ve had a very significant restrictions of people’s movements and freedoms in a way,” said Amber McCann, spokeswoman for Senate Majority Leader Mike Shirkey of Clarklake. “He thinks we can come to some middle ground in terms of the extension, and that doesn’t preclude it from being extended again if it were necessary at some point.”

While Republicans have backed Whitmer’s recent order to end face-to-face instruction in K-12 schools, some have become increasingly critical of the breadth of her stay-at-home order and its impact on businesses. Some have said landscapers, construction workers and golf courses, for instance, can operate with safe social distancing.

Greig, however, said she trusts Whitmer. She called a 23-day extension “grossly inadequate” and questioned if the Legislature could legally modify her request rather than either approve or reject it.

“If they’re telling us they need 70 days, then I want to give them 70 days,” she said. Senate Democratic Leader Jim Ananich of Flint said if legislators are going to extend the governor’s emergency powers, “it needs to be a substantial expansion.”

Both chambers will take steps to limit legislators’ interactions Tuesday. The Senate plans to suspend its “shot clock” for checking in, so senators can enter one or two at a time after likely having their temperature taken. The 38-member Senate needs 20 senators in attendance for a quorum. The resolution extending the emergency can be approved by voice vote, potentially by just the floor leader after other senators leave.

The House, which will have screening procedures in place, also may limit who is present for its vote.

“Every possible measure will be taken to minimize the risk of exposure to legislators and staff as they do what millions of other Michigan residents are doing every day and show up to perform an essential service,” Chatfield said.