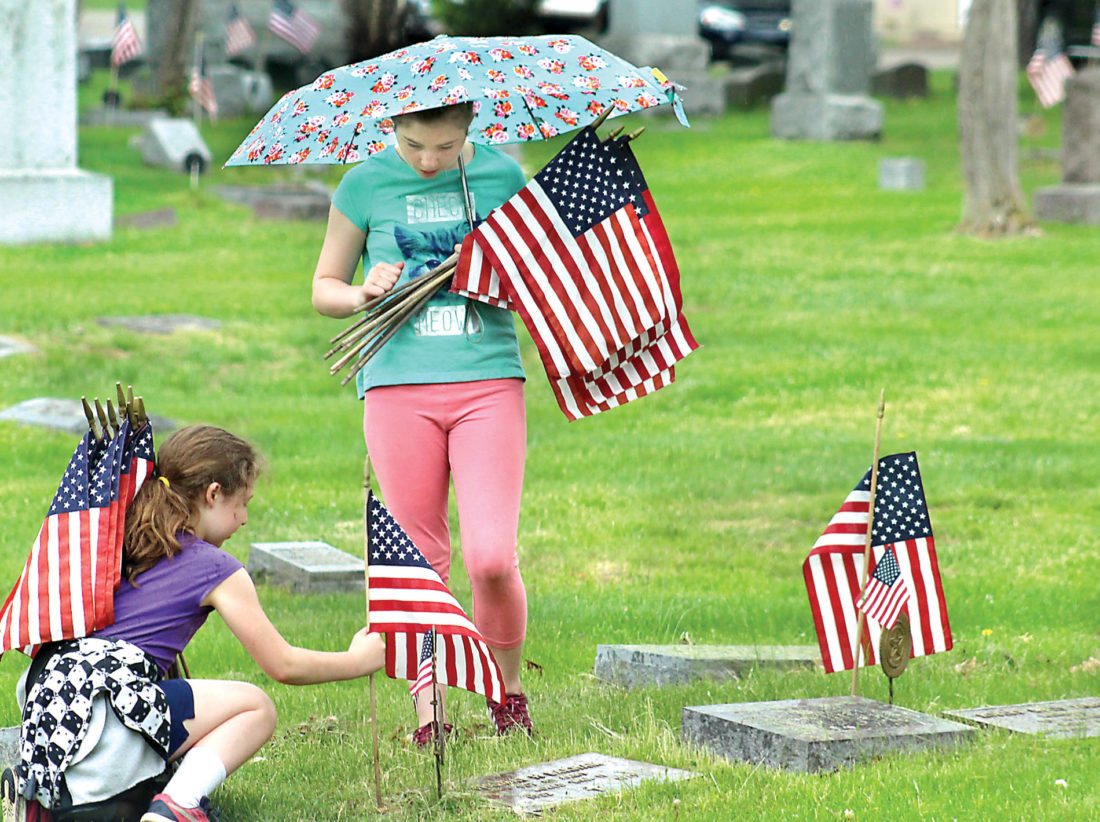 Area organizations and communities will have Memorial Day planned to honor the men and women of the U.S. military who died while serving their country.

The annual motorcycle Tribute Ride will stop by the medical center starting at 10:30 a.m. Saturday to honor inpatient veterans. About 350 motorcycles come roaring in and then riders go through a receiving line of veterans, thanking them for their service.

The annual Memorial Day Ceremony for inpatients takes places at 10:30 a.m. Monday in the outdoor pavilion behind the medical center. In the event of inclement weather, the ceremony will be in room 2376/2378 on second floor, above outpatient entrance.

The theme for Monday’s annual Memorial Day ceremony, coordinated by the Office of Veterans Affairs will be “Land of the Free Because of the Brave.” The event will begin at 8:40 a.m. with a parade from The Daily News office on Ludington Street in Iron Mountain and proceed through downtown to the Dickinson County Courthouse.

Kimberly Thomas, who was the Memorial essay winner, will be a guest speaker as well. Area Boy Scouts will lead the Pledge of Allegiance. Musical performances will be by the Iron Mountain and Kingsford High School bands, John Richtig, and Jeremy and Jaron Brown.

Gary Chapman will be master of ceremonies and Keen Scott the invocation chaplain.

Local Scout Pack 510 will lead the Pledge of Allegiance.

Kingsford Sons of American Legion will do the flag presentation, followed by the plaque presentation by Lewis Adams, Post 363 commander.

The Post 363 sergeant at arms will lead the POW and MIA salute.

Main speaker for the program will be Veterans Service Officer James Brown.

World War I memorial recognition will be given by World War I monument representative Denny Olson.

Student speaker will be Samantha Doran, an eighth grader at Kingsford Middle School.

Musical selections as well as “Taps” will be provided by the Kingsford High School band.

They will recognize deceased members of Post 363 — George Don Thayer, James Kerkela, Bob Morrell, and William Michaud — who have died since the last Memorial Day.

After the main program, post members will go to Memorial Gardens and conduct a short program for the veterans buried there.

A brief ceremony will begin the Memorial Day program at the band shell before the parade assembles at 10:15 a.m. Monday on Railroad Avenue. The parade steps off at 10:30 a.m. down Main Street.

Services at the Norway Township Cemetery will start at 11 a.m. The flag will be presented and raised by members of the Veterans of Foreign Wars and American Legion.

The Norway City Band will perform the National Anthem.

Terry Backlund will be master of ceremonies. VFW Chaplain George Olson will give the invocation. Holy Spirit School student will read the poem “In Flanders Fields” by John McCrae and John Grayvold will give the Memorial Day address.

Marie Devine will place wreath as a tribute to the unknown soldier and to all war dead. Olson also will read a prayer for departed comrades.

The American Legion and VFW Firing Squads will fire three volleys for the war dead and a single round for the unknown soldier. “Taps” will conclude program.

The Floriano-Stecker-Kelly American Legion Post 340 will begin Memorial Day ceremonies at 5 a.m. Monday by raising the flag to half-staff at the Riverside and Meyer Township cemeteries.

At 8 a.m., members of the Legion, Auxiliary, Vietnam Veterans of America, Boy Scouts and Cub Scouts will meet at the post’s club rooms.

Post 340 will conduct the roll call of deceased veterans.

Placing of wreaths will be done by Walter Bellmore, Post 340; Vietnam Veterans of America; Ladies Auxiliary Post 340; and others.

A band member will play “Taps.”

Lunch will be served at the Legion’s club rooms by the Ladies Auxiliary.

Coffee and brunch will be served at the Faithorn Town Hall after the Menominee River service.

All area veterans are asked to help honor those who served the country. Veterans can meet at 8 a.m. at the VFW Clubhouse.

The North Dickinson High School Band will provide music at the Felch and Foster City cemeteries.

An open house will begin at 11 a.m. at the clubhouse. The public is invited for food and refreshments.

Channing Legion Post 168 will begin services at 9 a.m. Monday at the Channing Cemetery.

Commander Gregg Harper will be emcee and speaker for the program.

Memorial Day services at the Bates Township Cemetery start at 8 a.m. Monday with the flag-raising by members of the Veterans of Foreign Wars Post 3134 of Iron River.

Music will be provided by Jane Adams and George and Patsy Peterson, with invocation and benediction by the Rev. Kraig Tass, pastor of Iron River Bible Church.

Main speaker for the program will be Don Waters, associate pastor of Iron River Bible Church and a former U.S. Navy lieutenant.

Sari Jacobson will read the roll call. After the benediction, the color guard will fire a salute and “Taps” is played to conclude the program.

Refreshments will be serve just after the ceremony at the Township Hall.

In case of inclement weather, the ceremony will be moved to the hall.

Ceremonies at Rosehill Cemetery in Beechwood will begin at 8 a.m. after the Amvets Post 436 color guard marches to the site.

Pat Turner will serve as master of ceremonies with the Rev. Larry Steckling giving the invocation and benediction.

Harlie and Gracyn Melstrom will place the wreath and will be joined by Annalia and Melina Lopez for the “Pledge of Allegiance.”

State Rep. Scott Dianda, 110th District, will be the guest speaker. Melina Lopez will give a patriotic readings, and Krista Gussert and Gary Friestrom will add musical selections.

Immediately after the program, everyone is invited to a social at Beechwood Hall.

Ceremonies in Crystal Falls will be conducted by the East Side Veterans Council. Observance begins with a parade that will assemble at 8:30 a.m. at the intersection of Washington Avenue and Logan Street and march at 9 a.m. to Evergreen Memorial Cemetery.

Christopher Sholander will be master of ceremonies, with Rev. Ken Ferguson giving the invocation.

Main speaker will be Mike Bjork, who was born and raised in Alpha and graduated from Forest Park Schools. He then entered the U.S. Air Force and honorably served for four years, nine months. After his honorable discharge from the Air Force in 1978, he was assigned to the National Security Agency at Fort Meade, Md. After earning a degree in international relations at the University of Maryland and then became a senior intelligence service officer with the CIA for more than 22 years.

Following the speech, and music by the Forest Park band, the VFW Auxiliary will lead the wreath ceremony. Then there will be a volley by the color guard, Taps by the band’s buglers and closing prayer from Ferguson.

After the ceremony, participants will board buses to Amasa for the parade and program. En route, they will stop at the 82nd Airborne Division Memorial for a wreath ceremony.

In case of inclement weather, the parade will be canceled and the service moved to 9:30 a.m. in the Eddie Chambers Memorial Gym at Forest Park High School.

The Amasa parade starts downtown. Afterwards, buses take participants to Hematite Cemetery, where the service will be repeated.

Events begin at 9 a.m. Monday with a volley fired at the old City Cemetery.

The West Side Veterans Council will lead a ceremony at 10 a.m. at the Veterans Memorial on Genesee Street. Jim Brennan will be the featured speaker

A parade up Genesee Street will take place just after the memorial ceremonies.

The program at Resthaven Cemetery in Iron River starts at 11 a.m. Brennan also will speak at Resthaven.

The program will be repeated at noon at the cemetery in Alvin, Wis.

The Memorial Day program starts at 10:30 a.m. Monday at the Stambaugh Cemetery. Marie Brunswick will be master of ceremonies.

The flag will be raised by members of the Caspian-Gaastra Fire Department.

Deacon Robert Kostka of St. Agnes/St. Cecelia Catholic Church, a member of Legion Post 21, will give the invocation and benediction.

Linda Nasser and Darla Bonno, members of the Reino Post 21 Ladies Auxiliary, will place a wreath on a cross in honor of all deceased veterans, and West Iron County students Jamie Child and Dawson Bongi will give recitations.

The program will conclude with the firing of the volley by the Reino Post 21 firing squad and playing of “Taps.”

In case of inclement weather, the ceremony will be at the Caspian-Gaastra Fire Department.

American Legion Post 136 of Niagara will have a Memorial Day service at 2 p.m. Monday at the Niagara Cemetery.

All participants and the public are invited to attend a reception after the service at the Niagara Senior Center on Washington Avenue, where refreshments will be served.

The annual Memorial Day program, paying tribute to all veterans, will be 11 a.m. Monday in front of the Veteran’s Memorial at the Homestead-Aurora Cemetery, on County Road B 3 miles west of Aurora.

Special music by Kevin Fraker; memorial readings and a roll call of deceased veterans will be part of the program. Everyone is asked to bring a lawn chair. Refreshments will be provided by the Aurora Free Church.

In case of inclement weather the program will be at the Aurora Free Church.

Florence Veterans of Foreign Wars Post 3635 will have Memorial Day services at 10 a.m. at the Martin Cemetery in Tipler, Wis., and at 10:45 a.m. at Long Lake Cemetery.

The American Legion Post 211 of Florence will have a program at 9 a.m. at the Woodlawn Cemetery in Florence, with a ceremony to follow at 11 a.m. at the Commonwealth Cemetery.

The Mullany-McTrusty Legion Post 428 and Auxiliary will conduct their annual Memorial Day ceremony at 11 a.m. at the Amberg Cemetery. Guest speaker will be veteran Chuck Fick. Legion members and the band will walk in from the road. The Wausaukee band will play musical selections and “Taps.” The Legion will follow with the gun salute and Auxiliary members will lay a wreath.

A lunch sponsored by St. Agnes Church will take place after the ceremony.

The American Legion Post 413 will conduct services Monday at 9:30 a.m. at the Middle Inlet Cemetery and 10:30 a.m. at the Crivitz Forest Home Cemetery. The guest speaker will be John Deschane, Crivitz village president. The Crivitz Middle School band, under the direction of Brian Kopfhammer, will provide an arrangement of Armed Forces melodies and “Taps.”

In case of inclement weather, the service at Middle Inlet will be cancelled and the Crivitz service will be at 10:30 a.m. at Crivitz Elementary School.