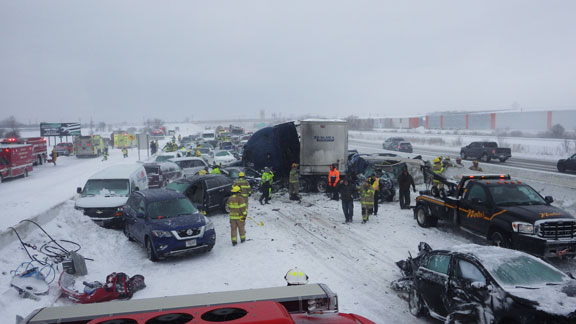 Cold is expected to linger across the Upper Midwest for the first couple weeks of March, with subzero lows the first week of March, said Twin Cities National Weather Service meteorologist Caleb Grunzke.

Dozens of schools in the four states closed Monday or began classes late due to the snow and bitter cold.

As of Sunday night, 17 inches had fallen in Jacobsville in Houghton County, said National Weather Service meteorologist Joe Phillips. Other readings included 13 inches in Hancock and 11.5 inches in Houghton.

The Minnesota National Guard and sheriff’s deputies rescued nearly 100 stranded motorists over the weekend. The State Patrol said whiteout conditions Sunday contributed to 165 crashes with 20 injuries, according to the Minneapolis Star Tribune.

In Wisconsin, a chain-reaction pileup Sunday involving 131 vehicles on Interstate 41 in the Neenah area killed one motorist and injured 71 others. Winnebago County Sheriff John Matz on Monday identified 30-year-old Andrew Schefelker of Oshkosh as the person killed in the pileup. Schefelker was a middle school/high school science teacher in the Iola-Scandinavia School District, Matz said.

“I’ve been in the law enforcement business, this is my 27th year,” Winnebago County Sheriff’s Department Chief Deputy Todd Christopherson told the Milwaukee Journal Sentinel. “On scene, that was the worst conditions I’ve ever seen.”

No travel was advised in parts of Wisconsin early Monday because of poor road conditions.

A jail in St. James, Minnesota, temporarily housed the St. Cloud State men’s hockey team Sunday after its bus got stuck between two snowdrifts on a rural road.

“We were looking for ways around roads that were impassable,” assistant coach Mike Gibbons told the Star Tribune. “We thought we could travel on a 1-mile (stretch of road and it backfired . there was probably an 8-foot drift in front of us.”

In northern Minnesota, rescuers on snowmobiles and snowshoes battled 50-mph winds to rescue four anglers stranded on a snow-swept lake.

Search and rescue personnel from several agencies found the foursome about three hours later. One angler was showing signs of hypothermia, frostbite and dehydration and was taken to a hospital on roads that had to be cleared of drifting snow by a private plow operator.

The roof of a 150-year-old historic covered bridge in Zumbrota in southeastern Minnesota collapsed Sunday due to the heavy snow and high winds, Minnesota Public Radio reported. It was the only remaining covered timber truss bridge in Minnesota, according to the state Transportation Department. Mayor Bradley Drenckhahn said the bridge, which is listed on the National Register of Historic Places, is insured and officials have the blueprint to rebuild it.

In northeastern South Dakota, a grain train derailed in Milbank early Monday when it struck a pickup truck hauling a trailer that became stuck in snow at a crossing, City Administrator John Forman said. Twenty-three rail cars and two engines went off the track, spilling an unknown amount of grain. No one was hurt.