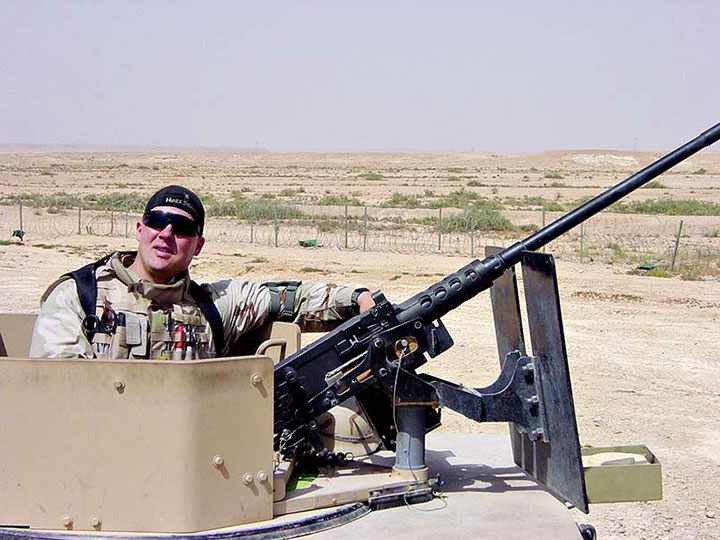 JEFF HAUSWIRTH, AN Iraq War veteran who now teaches at Houghton High School, has released an EP, “Forever 29,” about his experiences as a combat medic.

HOUGHTON — Jeff Hauswirth, an Iraq War veteran, is using music to process his experiences there.

Hauswirth’s EP, “Forever 29,” was released April 26. The six-song EP is more than a decade in the making.

Two of the songs date back to 2006, when Hauswirth, then a hospital corpsman in the U.S. Naval Reserves, was called back to active duty. He served as a combat medic in Al Asad, Iraq.

When he returned home, the Houghton High School teacher played the two songs at a special assembly. Even then, he was planning to record the songs eventually. But for a long time, it was too difficult, he said.

“Every time I went to do it, it was like going back to that point in time,” he said. “It wasn’t really fun and games. I just kind of compartmentalized and put it all away for a while.”

New momentum arrived last summer, when he was accepted into the Veterans Entrepreneurship Program through the University of Tennessee – Chattanooga. One speaker, a financier, talked about her work helping regionally successful

bands promoting themselves at a national level.

Hauswirth talked with her about the songs he had been looking to record. She connected him with people in Nashville.

In August, he spent a week at the Old Hickory, Tennessee, home of producer Michael Flanders, who has a basement studio.

“To hear it at each stage was almost kind of a birth, like ‘OK, here we are,'” he said. “And it just grew and grew. The ending, what he came out with, it just blew me away at the quality.”

“Thought you’d get out and rule the world, get back home and raise your girl/Thought you’d conquer it all, but we all thought wrong,” Hauswirth sings.

Revisiting those memories was as painful in 2018, Hauswirth said. That was especially true with the recording process, requiring him to do repeated vocal takes.

“It’s sort of constantly throwing it at you and tearing that scab, to get it right,” he said. “So it was really digging to make it happen.”

Of the remaining two, “Practice What You Preach” is a non-partian song directed at politicians. “I’ll Be Your Light” is dedicated to Hauswirth’s grandchildren, who he promises to “spoil you the best I can/but teach you wrong from right.”

Twenty-five percent of the sales go to the United Service Organizations (USO), which provides live entertainment for military members and their families.

“My goal is really just to raise money and awareness for veterans,” Hauswirth said.

Some of the songs might get live showing through gigs with Hauswirth’s duo, Northbound. However, he hasn’t set up anything with a full band.

Whether or not listeners have served in the military, Hauswirth hopes they can find something positive in it.

“When someone in the service dies and you’re in that combat situation, you become family,” he said. “Most people have lost family members, very close friends, so maybe for them they can hold on to a piece of that and help them like it helped me to get it out.

For more information, go to Hauswirth’s Facebook page at facebook.com/jhauswirthmusic. The video to “Forever 29” can be found at https://www.youtube.com /watch?v=fGVLyxvgSaE.

Garrett Neese can be reached at gneese@mininggazette.com.