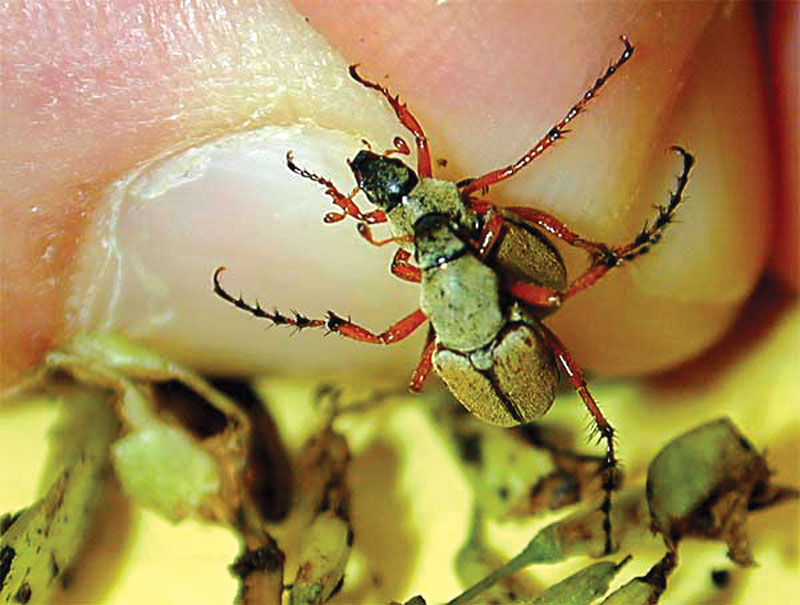 University of Wisconsin photo | Rose chafers are active in late spring and early summer, especially in the sandier portions of the Midwest.

The beetle that pulls this magic appearing act is the rose chafer. It is a very serious pest of many plants and can nearly defoliate shrubs and trees in very short time due to their habit of group feeding.

Further, they can cause heavy fruit loss on small fruits or fruit trees; or they can decimate the flowers of many other plants — they really like peonies. When feeding on leaves, they generally leave the net-like veins in a symptom called leaf skeletonization.

The rose chafer is a leggy beetle about 1/2-inch long with orange legs and tannish-green body coloration. The overwintering stage is the nearly-mature larvae, which pupate in early spring and usually emerge as adults in June. The adults are short-lived, only two to three weeks, but can inflict heavy damage because they are usually found in groups and eat a lot of plant material each day.

Eggs are laid in sod areas — such as pastures, fallow areas, large lawns — that are sandy and well-drained. The larvae feed on plant roots, but generally do little or no damage. Rose chafers are an annual phenomenon in most areas of Oconto, Marinette, Florence and Menominee counties because of the sandier soils. Thus, residents should plan on having to deal with them and be prepared to do so.

Damage can be averted by placing an insect-proof netting, such as cheese cloth or the like, on your plants during the weeks they are present. Diligently watching preferred plant species and noticing when the insects first appear is key to making this technique work, however.

Physically removing the insects from smaller plants also is a viable option, but needs to be a daily or more often routine. This is especially useful for ornamental plants that you don’t want to have covered up or flowering fruits that need to be pollinated.

One method is to place a large cloth under larger shrubs and trees and shake the plant hard, then quickly wrap the cloth up and dump the insects into a water/soap solution. Remember that the beetles are strong fliers and large numbers of them can literally appear overnight. (Don’t sic your chickens after them — they are fairly toxic to chickens.) Another type of physical control is trapping them with the correct pheromone-laced traps. However, you want to place the traps near plants you are willing to sacrifice, as you may attract more than you can kill in the traps.

Chemical control is also a possibility, and can take two forms: grub control and/or adult control. Grub control is not the recommended approach. Although the ground around preferred plant species can be treated in late summer with an insecticide to kill the grubs in the immediate area, this does not eliminate next year’s adults. There are two reasons for this: strong flying ability and preferential egg laying in sandier, less densely plant populated areas.

The adults can be controlled with insecticides such as carbaryl and methoxychlor, but may require multiple applications. If you decide to use an insecticide, read and follow the label directions carefully.

A major issue with insecticide use is that these beetles are often feeding on flowering plants, meaning that you may kill pollinators if you spray those plants.

The final option for some types of plants is to use a chemical/physical barrier. Surround (kaolin clay) can be sprayed onto plants and this acts as a barrier to rose chafer damage. To the beetles, it is like us having to eat really sandy spinach, so they go elsewhere for better eating. This works pretty well on fruit crops, but is akin to whitewashing, so many people don’t like this option on ornamentals. In addition, it needs to be reapplied after a rain event.

The rose chafer is a native beetle. However, a close relative non-native beetle is expanding its range northward. That is the Japanese beetle, which is found at least as far north as Highway 64 in Oconto and Marinette counties now. The Japanese beetle is larger, much more metallic/shiny in appearance and much worse to manage in the landscape. They are more troublesome because the adults live much longer. This species is not yet out but may start appearing within the next couple weeks.

Positively identifying the species you are dealing with is a helpful step in managing them, so consider bringing a sample into your local Extension office.

Another identification technique is to e-mail a photo of the insect to Extension Horticulture Agent Scott Reuss at sreuss@marinettecounty.com You can also call the Marinette office and talk to Reuss at 715-732-7510.