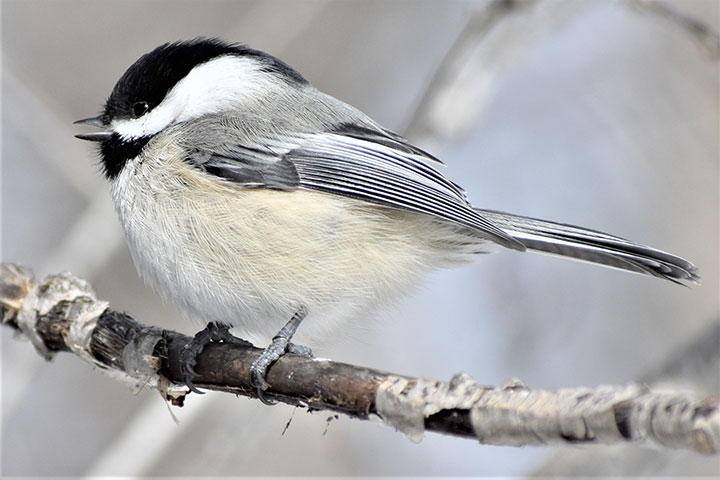 The email’s subject line posed the question: “Where are all the chickadees?”

Priscilla Hall wrote that these normally numerous signature woodland birds have been no-shows at their Rock camp in Delta County, adding she’d heard a radio caller from Manistique mention “the same lack of these delightful little birds.”

No idea here. We’ve had chickadees at Six Mile Lake, though it did take a couple hours Friday morning to see the first ones come in after loading up the platform feeder with black oil sunflower seeds and peanuts in the shell. Guess the news took time to spread.

Ryan Brady, Natural Heritage Conservation Program biologist for the Wisconsin Department of Natural Resources, said he’s not heard reports of chickadees gone missing elsewhere and knows of no significant threat to their numbers.

Black-capped chickadees — the most common kind found in the Upper Peninsula — don’t do seasonal migrations, even short distances. They instead form winter flocks, often with other species such as nuthatches and woodpeckers, according to the Cornell Lab of Ornithology’s All About Birds website, www.allaboutbirds.org.

Those flocks will gravitate toward reliable food sources, places that have cover and a regular supply of seed, Brady said. Though he admitted it’s speculation, he offered a few possible explanations for the absent chickadees: feeding hadn’t been done for awhile so the birds moved on, the seed offered might have been from earlier in the year and gone stale over the summer, it might be a lesser feed mix that contains fillers the birds don’t normally eat, or perhaps a hawk or northern shrike has turned up in the yard.

Shrikes are returning to the region and can be relentless in pursuing songbirds, Brady added.

It also could be “Jim down the street put up some feeders and they’re down there,” he said.

He had several suggestions for better attracting winter birds, including chickadees: Invest in quality seed, with black oil sunflower and raw peanuts having the widest appeal; keep the feed fresh; clean the feeders often; and maintain good habitat where the birds can roost or take refuge if needed.

Ice now fully covers Six Mile Lake, signaling the end to what has been a poor fall for seeing migrating birds. Waterfowl were scarce, different songbirds scant at the feeders.

The same has been reported across the northern states all the way to the East Coast, Brady said. Banding efforts had fewer captured birds, he said, adding that can be a sign of a poor nesting year for a number of species.

The other factor, too, is Canada had an excellent year for fruits, seeds and cone production — known as mast — so many of the winter finches that might grace the feeders here likely won’t come down.

It adds up to what might be a dull winter for birds in the region. Brady added another pessimistic note this week: “As of (Thursday), no snowy owls have been reported in Wisconsin. In fact, only a handful have been seen in the lower 48 so far, best being several individuals that arrived to eastern Michigan in the last week. By this date in the 2017-18 irruption year, 38 had already been found here in Wisconsin, and even last year’s non-irruption year already featured 14 observations. The only year in the last six to have no Wisconsin sightings this late in the year was 2016-17, which ultimately yielded the lowest observation total of any since at least 2010.

“Moreover, the few birds photographed in the northern U.S. and southern Canada so far show a relatively high proportion of adult owls, whereas big irruption years often consist of many juvenile birds. As a result, all early evidence suggests it will not be a big year for snowy owls in Wisconsin.”

Even in poor years, though, at least some snowy owls turn up, Brady said. So it’s still worth watching.