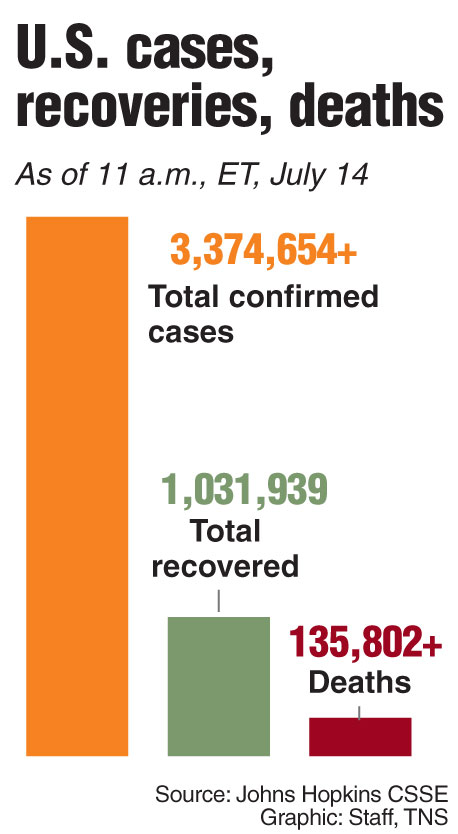 Marinette County continues to be a hot spot for COVID-19 in the region with another 21 new positives reported Tuesday to reach 121 total cases.

The county remains at three deaths, according to the state Department of Health Services’ COVID-19 data site.

The 21-case jump in Marinette County comes as Wisconsin had a new high of 964 new cases Tuesday for a total of 37,906 to date, according to the state DHS data site.

For the first couple of months of the pandemic there was an average of one to two cases per week in Marinette County, said Molly Bonjean, the county’s public health officer.

“In the past month that went to three to four cases per day, and then to seven to eight cases per day,” she said. The new cases reported Tuesday marked a record high for the county.

“Once someone is diagnosed with COVID-19, it is essential that the individuals they have had contact with are identified in order to help prevent further spread of the virus,” Bonjean continued.

“Contact tracing is a critical tool and everyone’s cooperation with this process is appreciated to help box-in COVID-19 in our communities. With the increase in positive cases the contact tracing process is taking longer.”

Bonjean warned against “bad actors” during the pandemic. “Contact tracers will never ask you for your credit card, bank account numbers, or Social Security numbers,” she said. ” You will never be sent a text message with a link to click.”

The state also listed Florence County with a new case Tuesday, its fifth; the county confirmed the case on its Facebook page but provided no other information. The Iron County Health Department in Wisconsin on Tuesday posted on its Facebook page that it had three new positives for a total of 20.

On the Michigan side of the border, local and state health officials Tuesday reported a new positive in Dickinson County, bringing it to 20 confirmed cases; again, no other details were released.

Across the Upper Peninsula, state COVID-19 statistics Tuesday listed four new positives each in Dickinson — three had been reported by the local health agency Monday afternoon — and Menominee counties, plus one each in Baraga, Chippewa, Gogebic, Keweenaw and Marquette counties. Houghton County had a new case as well that is not reflected in the state figures.

The state also removed a new death it had posted for Delta County.

Using strictly the state figures, the Upper Peninsula as of Tuesday has had 284 confirmed COVID-19 cases with 18 deaths.

The Dickinson-Iron District Health Department on Tuesday listed Dickinson County with 20 positives so far, of which two had died, four recovered and 14 are active cases. Iron County has had eight cases, with one death, two recovered and five still active, according to the DIDHD.

Dickinson County Healthcare System as of Monday showed five cases from Dickinson County and nine cases from other counties; those counties are not identified. DCHS has tested 1,657 people for COVID-19, with 14 positive, 1,565 negative and 78 results still pending. DCHS noted there are several additional sources of testing in Dickinson County.

For other Wisconsin counties in the region, the state DHS COVID-19 data site Tuesday listed Forest County with 48 cases and three deaths; Iron County 17 cases and one death; Vilas County 17 cases; and Florence County five cases. As with the Michigan data, the state numbers are updated daily but can lag behind local reports.

The state recorded six new COVID-19 deaths Tuesday to reach 826 to date, according to the DHS data site.