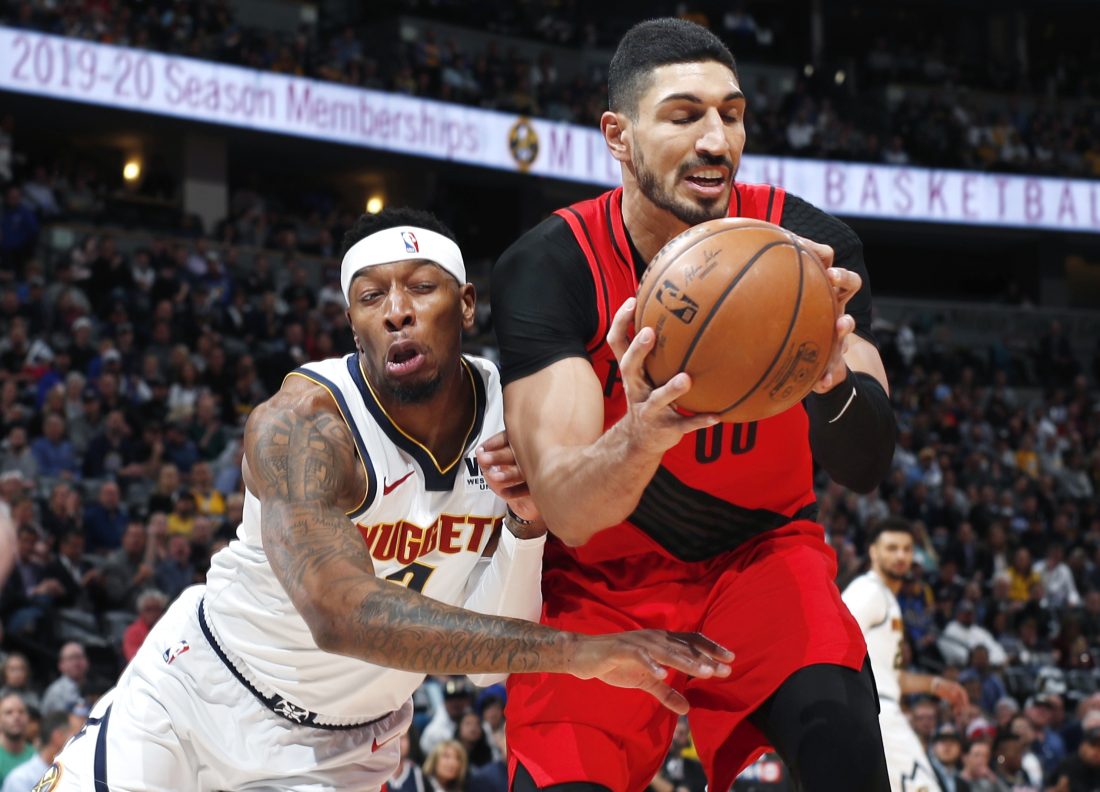 DENVER (AP) — After giving up 39 points to Damian Lillard in the opener, the Denver Nuggets were determined to make sure Portland’s role players would have to bear the burden of evening up the series.

His teammates were up to the task on a night that Lillard, who came in averaging 34.8 points in the playoffs, was held to 14 points on 5-of-17 shooting.

CJ McCollum led six Trail Blazers in double figures with 20 points in a 97-90 victory at the Pepsi Center on Wednesday night that evened their series 1-1.

“It’s very important,” said Enes Kanter, who chipped in 15 points for Portland. “Teams can’t guard him with one man. They were sending double-teams, triple-teams. That’s when I said, ‘He’s making himself better, but at the same time he’s making everybody else better around him.’ He was passing the ball, really active on defense. He’s been unbelievable, man.”

The series shifts to Portland for Game 3 Friday night, and Lillard’s hoping a return to the Moda Center will help him find his long-range rhythm after he misfired on 14 of 19 3-pointers in Denver.

The Nuggets trimmed a 17-point, third-quarter deficit to 95-90 in the final minute thanks to an astonishing 14 offensive rebounds in the fourth quarter and a 19-9 run before Rodney Hood’s two free throws with 17 seconds left iced it.

“The good news is they had all of those offensive rebounds but they didn’t convert a lot,” Portland coach Terry Stotts said. “They were 8 for 24 on second-chance points. We were fortunate we came away not hurt as badly as we could have been on the offensive boards.”

Nikola Jokic had 16 points and 14 boards but got off to a slow start and wasn’t nearly the take-control force he was in Game 1, when he scored 37 points.

“The last quarter we missed a lot of put-backs, but 23 offensive rebounds is a big number,” Jokic said. “The first half we had open shots but we didn’t make any of those.”

With Jokic taking — and missing — just one shot in the first quarter and scoring six points in the first half, the Nuggets trailed 50-35 at halftime after the franchise’s worst quarter ever at home in the playoffs, one in which they made just 5 of 23 shots and missed all 10 of their 3-pointers.

They started doing that after halftime, but the Blazers answered time after time, getting 15 points from Hood, 11 from Al-Farouq Aminu and 10 from Zach Collins.

Denver sparkplug forward Torrey Craig’s nose was bloodied after he was knocked down and slammed into teammate Monte Morris’ foot early in the second quarter. Moments after Craig hobbled off, leaving a trail of blood, Maurice Harkless rolled his right ankle and also left the game.

Harkless didn’t return but Craig came back in the second half.

Jamal Murray spent part of the fourth quarter on the stationary bike trying to loosen up his tight right thigh. He missed 12 of 18 shots.

Craig, whose insertion into the starting lineup turned around the Nuggets’ first-round series against San Antonio, returned with a face mask with 3 minutes left in the third quarter. He immediately grabbed a rebound and his 3-pointer with a minute left in the quarter was Denver’s first since 1:11 of the first quarter.

“I think Torrey Craig is the unsung hero of the game,” Malone said. “He’s got some (guts). He’s got some toughness.”

Jokic pushed Kanter, who slammed into Craig with 43.5 seconds left on a made free throw. Murray took exception to Kanter staring down the fallen Craig and a scuffle ensued at midcourt. The two were assessed a double technical.

Stotts and his assistants rocked bow ties Wednesday night in honor of Jon Yim, the team’s video coordinator and player development coach who was seriously injured in an auto accident last week that left him hospitalized with a broken leg and collapsed lung.

“That was dope,” Harkless said. “I thought it was pretty cool. They all took a picture before the game in the locker room, probably send it to him. That’s a cool gesture. We all wish he was here. We’re all praying for him. We feel him. He’s a big part of our team still. We’ll see him when we get home.”

Portland: Harkless and Aminu combined for 10 points in the first quarter after being held to a combined four points in Game 1.

Denver: Will Barton sank two foul shots with 8:19 left in the fourth quarter after an odd sequence in which the Jokic missed a jumper and the Nuggets missed five put-backs.