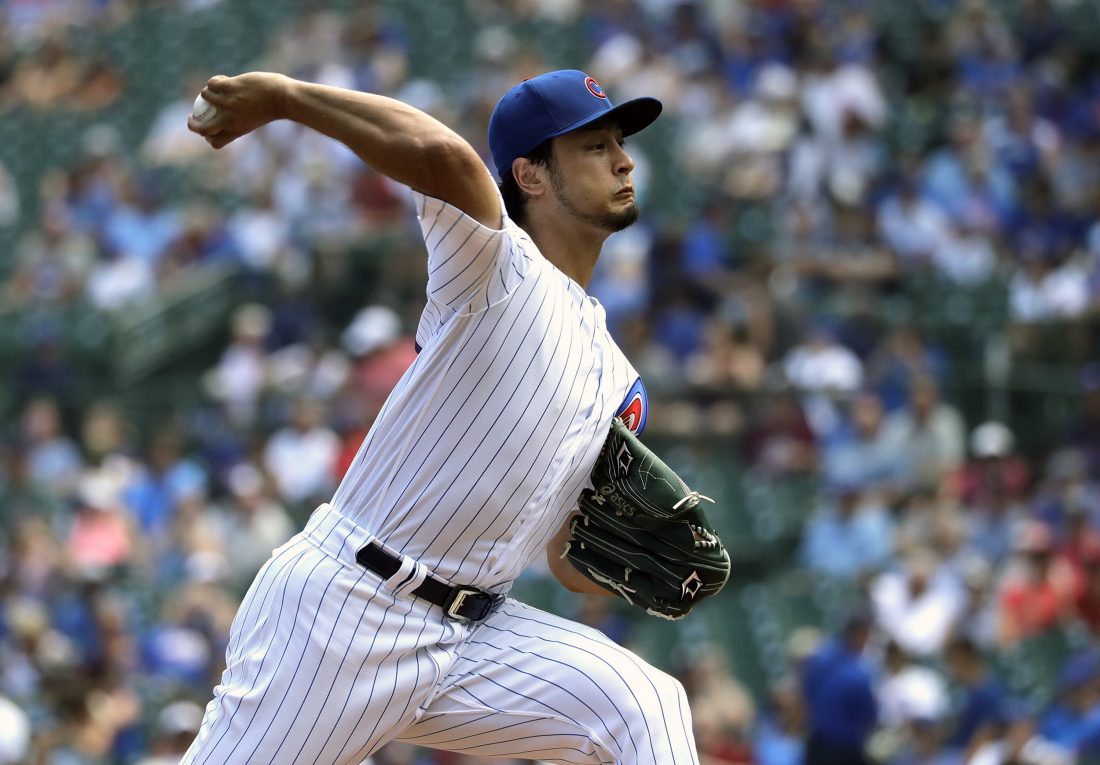 CHICAGO (AP) — Yu Darvish finally had a reason to celebrate at Wrigley Field.

Darvish tossed six innings of two-hit, shutout ball to earn his first win at the iconic ballpark as a Cub and lead Chicago past the Cincinnati Reds 5-2 on Wednesday.

Kris Bryant and Addison Russell homered for the only hits off Sonny Gray (5-6) as Chicago won for the fifth time in six games.

So when the normally stoic right-hander fanned Yasiel Puig for his final out in the sixth and a runner on base, Darvish turned to the outfield, hollered and pumped his fist.

“It’s amazing,” said Darvish, who kept the game ball and joked he might give it to his wife. “I was always looking for that first win. Puig is good hitter, if I give up a homer it’s going to be a tie game, so I threw 100 percent.”

On Wednesday, the right-hander was sharp for the second straight start and didn’t allow a hit until catcher Juan Graterol lined a soft single to center with two outs in the fifth.

“He kind of had no-hit stuff,” manager Joe Maddon said. “I was thinking that, but so did their guy. Again, Yu just keeps trending in the right direction.”

Darvish (3-4) also won for the first time anywhere since April 27 at Arizona as he struck out seven, walked none and hit two batters. The right-hander had 12 no-decisions and a loss in his previous 13 starts.

Darvish hasn’t allowed a run in 13 2/3 innings. He credits mixing his pitches differently and a confidence level of “almost 120 percent” as keys to his turnaround.

“I don’t need anything right now,” he said.

Jason Heyward drove in two insurance runs with a double as the NL Central leaders took two of three from the Reds to win just their second series since sweeping St. Louis on June 7-9.

Craig Kimbrel pitched a perfect ninth for his fourth save in five chances.

Gray nearly matched Darvish, allowing just two hits — Bryant’s and Russell’s drives — while striking out eight and walking none through six innings. Nick Senzel and Puig drove in runs in the eighth off Brandon Kintzler, but the Reds lost for the sixth time in eight games.

Gray has a 1.65 ERA in his past four starts for the last-place Reds.

“I mean, ultimately, where we are, the only thing that matters is to win games,” Gray said. “It’s irrelevant if you’re not winning games.”

Before Graterol’s hit, Darvish retired 14 of the first 16 Cincinnati batters. The righty hit Scooter Gennett with a pitch with two outs in the second, then struck Derek Dietrich on the right knee to lead off the fifth.

Dietrich was replaced by pinch runner Phillip Ervin after being plunked for the league-leading 21st time and fourth time in three games in Chicago.

Bryant hit his 20th homer and went deep for the second straight day when he lofted the first pitch he saw into the left-center bleachers for a 1-0 Chicago lead.

Russell made it 2-0 in the second with a solo shot to left, his sixth homer.

Senzel was thrown out at the plate in the sixth by third baseman David Bote when he tried to score on Eugenio’s Suarez’s sharp chopper.

Heyward’s two-run double off David Hernandez in the seventh made it 4-0. After the Reds closed to 4-2, Anthony Rizzo singled in a run in the bottom of the inning.

As Darvish racked up strikeouts, the crowd of 37,260 bellowed “Yuuuu” more loudly with each one.

“Believe me he’s into it,” Maddon said. “The little smirks, the smiles. I really anticipate he’s going continue on this rise.”

The Reds placed closer Raisel Iglesias on the three-day paternity list and selected Graterol’s contract from Triple-A Louisville. Iglesias is 2-8 with 17 saves in 19 chances. Graterol started Wednesday and batted eighth.

Reds: C Curt Casali (right knee inflammation) didn’t start for the second straight game, and may be headed to the IL, manager David Bell said. . Kyle Farmer, hit in the mask by two foul tips on Tuesday, was scheduled to be evaluated on Thursday under concussion protocol. He was listed to start Wednesday behind the plate before Graterol arrived. CF Senzel left the game in the bottom of the eighth with left hamstring tightness. LHP Amir Garrett, on the IL since July 5 (left lat strain), threw 20 pitches off the mound at Wrigley Field before the game and will soon be activated or go on a rehab assignment.

Cubs: LHP Cole Hamels (left oblique strain) tossed his first bullpen session on Wednesday since getting injured in a start at Cincinnati on June 28.

Reds: LHP Tanner Roark (5-6, 3.99) takes the mound Thursday against St. Louis RHP Dakota Hudson (8-4, 3.48) in the opener of four-game series against the Cardinals in Cincinnati.