Woods trying to get up to speed for British Open 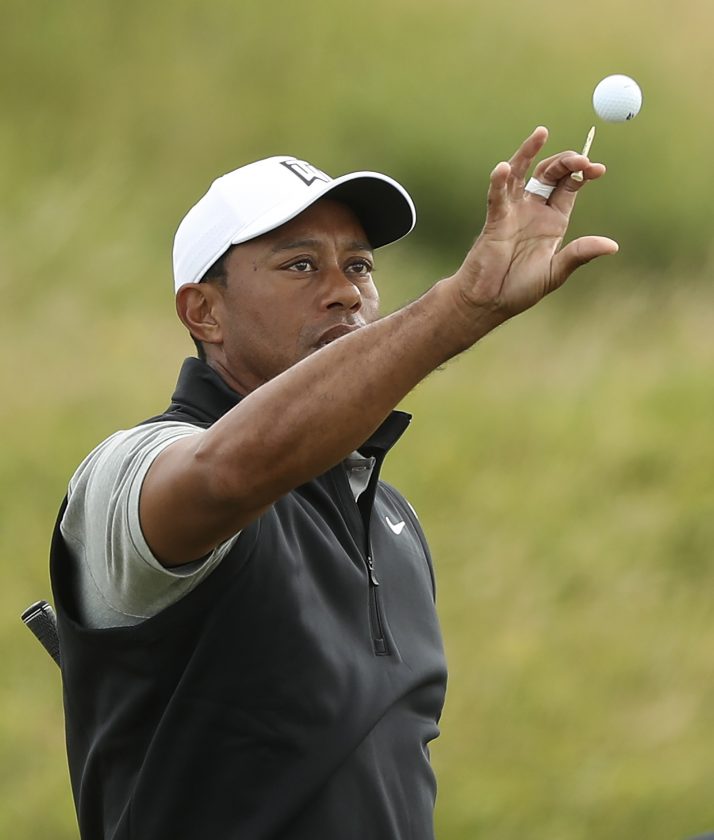 Tiger Woods of the United States catches a golf ball as he prepares to hit practice shots ahead of the start of the British Open at Royal Portrush in Northern Ireland on Tuesday, July 16, 2019. The British Open starts Thursday. (AP Photo/Jon Super)

PORTRUSH, Northern Ireland (AP) — Tiger Woods was on the practice range when the gates at the British Open opened Tuesday, and before long he was on the tee and ready to go. He just didn’t go for very long.

Woods played a full round at Royal Portrush when he arrived Sunday morning, and then again on Monday. For his third day of getting to know a links course that hasn’t hosted the British Open in 68 years, Woods made it down No. 1 and then skipped over to the 13th and played the homestretch.

It would be simple to assume it was fatigue. After all, Woods hasn’t competed since June 16 at the U.S. Open, and he has only 10 rounds under his belt since his victory in the Masters for his 15th career major.

In this case, no one wants to overdo it at a major, so this was nothing out of the ordinary.

Then again, very little is ordinary with golf’s biggest star these days.

When asked if there was anything physically bothering him outside the norm, Woods smiled and said, “Anything outside the norm.” The laughter made it hard to hear him say, “No.”

His chances at the British Open are nearly as mysterious as Royal Portrush.

Even at age 43, with four knee surgeries and, more recently, more back surgeries behind him, he showed how capable he was against a young generation of talent by winning at Augusta National with smart, strategic golf to overcome a two-shot deficit and win a fifth green jacket.

It’s everything since then that speaks to his outlook on golf.

He took a month off to recover emotionally and physically from his taxing win at the Masters, only to miss the cut at the PGA Championship. He played the Memorial and then the U.S. Open, and then he was off to Thailand for a family holiday before returning home to Florida. At this rate, he’ll play no more than 14 times in the PGA Tour season, though he still has a few events overseas at the end of the year.

This is the new norm.

Woods played plenty last year trying to get back inside the top 50 in the world — he now is up to No. 5 — to become eligible for World Golf Championships he once took for granted. It led to more golf than he wanted to play.

“So this year I made a conscious effort to cut back on my schedule to make sure that I don’t play too much,” he said. “I want to play here as long as I possibly can. And you have to understand, if I play a lot, I won’t be out here that long.”

The trick now is to figure out how much he needs to compete in tournaments to be ready, and listening to his body.

And still to be determined is what kind of weather — the wind, in particular — Woods and the rest of the players will see. The wind has not been the prevailing direction for two days of practice, and it hasn’t been much wind at all.

The forecast? Take a pick.

One bulletin provided by the R&A said the tournament days would feature “changeable conditions continuing with showers or longer spells of rain interspersed with drier and brighter interludes.” It concluded by saying, “Confidence low in any details at this stage.”

That was about as clear as picking who stands the best chance at Royal Portrush.

Woods sees it as other links courses, where power can be equalized by control. Darren Clarke, who forged his game on these links as a junior, felt the same way. He even pointed to a 6-foot wide swath of fairway on a slope at the 17th that would send the ball down toward the green. Now that’s control.

“The last couple of days, power has been a huge deal,” Woodland said. “I’ve hit a lot of drivers.”

He played with Matt Kuchar and Zach Johnson on Monday — it would be exaggerating to say Woodland can hit it longer than their drives combined, but not much — and he found a “huge advantage” by being able to send it a long way in the air.

Woods used as references Greg Norman and Tom Watson, two former British Open champions who nearly won in their 50s because length is not as paramount at Augusta National or the other two U.S. majors.

Norman was 53 (and still on his honeymoon with ex-wife Chris Evert) when he had the 54-hole lead at Royal Birkdale in 2008. A year later, a 59-year-old Watson was an 8-foot putt away from winning at Turnberry. He lost in a playoff.

Woods isn’t that old. There was some speculation that cool air — at Bethpage Black in May, at Pebble Beach any time of the year — at the previous two majors didn’t help his cause as he tries to keep his back loose.

“It’s just part of, unfortunately, dealing with the procedures I’ve had, and being a little bit older,” Woods said. “It just doesn’t move quite as fast when it’s a little bit cooler. But the great thing is playing in an Open Championship, you can do it. Look what Tom did at Turnberry, what Greg did at Birkdale. The golf course is fast enough. You just have to navigate the bunkers and navigate around the golf course.”