League finds ‘no such evidence’ 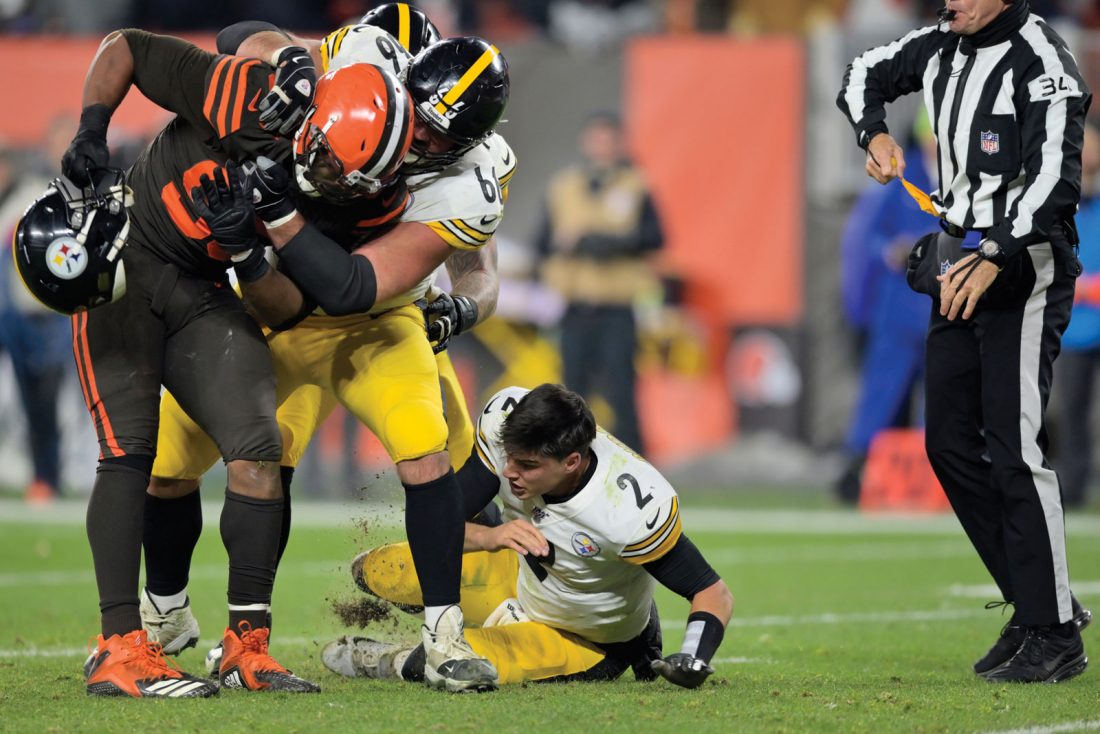 PITTSBURGH (AP) — The on-field fight between Pittsburgh Steelers quarterback Mason Rudolph and Cleveland Browns defensive end Myles Garrett has turned into a war of words off it, with Rudolph denying an anonymous report alleging he used a racial slur shortly before their now infamous confrontation last week.

ESPN, citing anonymous sources, reported Garrett told the NFL during the appeal of his indefinite suspension Rudolph used a racial slur just before a confrontation between the two players that included Garrett ripping off Rudolph’s helmet and then hitting the quarterback in the head with it.

NFL spokesman Brian McCarthy said the league investigated Garrett’s claim and “found no such evidence” of the slur. The NFL upheld Garrett’s indefinite suspension on Thursday, though the accusation added another complex layer to an already emotionally charged rivalry, with members of both clubs rising to the defense of their teammates.

“I was never sure what provoked Myles in the first place,” Browns guard Joel Bitonio said. “Obviously something was provoking him, if it was in the pile or not and I think it just shows that he was provoked and if it was a racial slur, if it was something else that was said, something was said to kind of make it, it always takes two to tango. Most times people don’t just freak out on that and we understand that, but we’ll see what happens from here.”

Cleveland coach Freddie Kitchens said he supports Garrett “in every way possible” but did not comment when asked if Garrett told Kitchens about the slur in the aftermath of the fight. Defensive lineman Sheldon Richardson said Garrett “wouldn’t lie on nothing like that” but later added “(Rudolph) could have called him anything. I don’t know.”

Rudolph was scheduled to speak to reporters on Thursday but declined shortly after the ESPN report surfaced. Steelers spokesman Burt Lauten said Rudolph “vehemently denies” the allegation. Rudolph, who has not yet been disciplined for his role in the fight, spoke about the incident on Wednesday, saying there was “no acceptable excuse” for his behavior while adding he “definitely didn’t say anything that escalated” the situation.

“I was assured that the hearing was space that afforded the opportunity to speak openly and honestly about the incident that led to my suspension,” Garrett said Thursday night. “This was not meant for public dissemination, nor was it a convenient attempt to justify my actions or restore my image in the eyes of those I disappointed.

“I know what I heard. Whether my opponent’s comment was born out of frustration or ignorance, I cannot say. But his actions do not excuse my lack of restraint in the moment, and I truly regret the impact this has had on the league, the Browns and our devoted fans.”