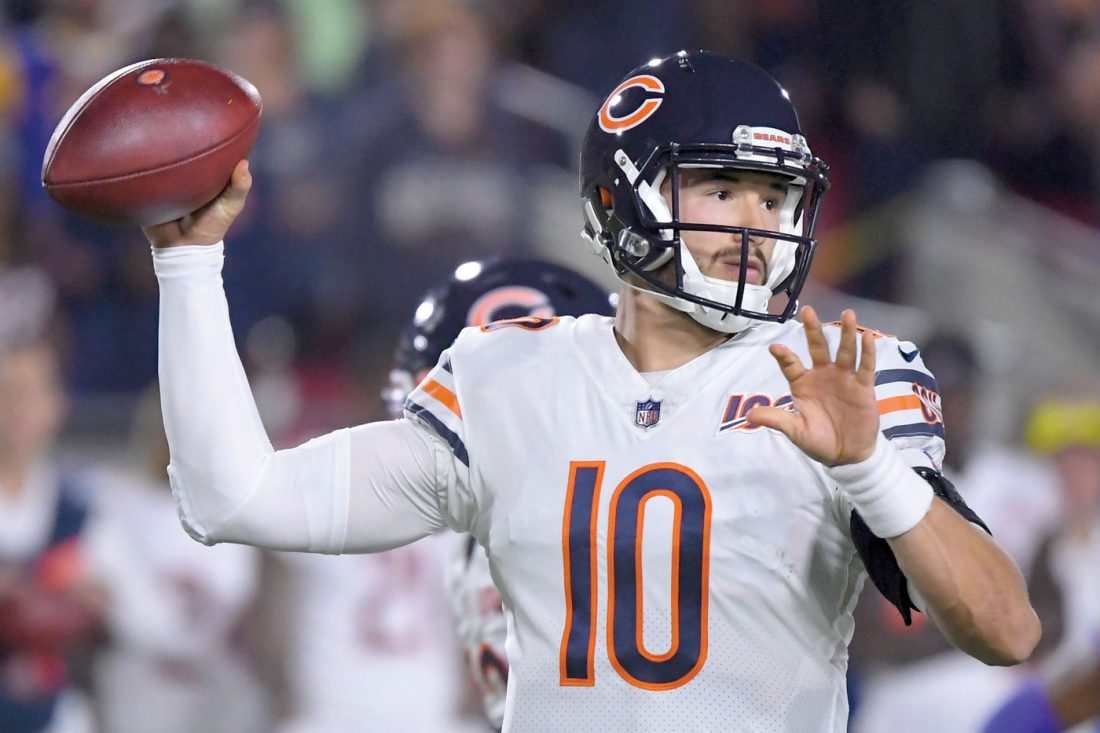 LAKE FOREST, Ill. (AP) — Whatever chance the Chicago Bears had to make something of their season is just about gone.

A 17-7 loss at the Los Angeles Rams on Sunday all but assured the defending NFC North champions will miss the playoffs for the eighth time in nine seasons. And it was as ugly and as painful as any.

“Just offensively, I know that we have the pieces and everything,” coach Matt Nagy said. “We just haven’t had that one game where it’s just been four quarters of just fireworks. It just hasn’t happened.”

What the Bears (4-6) have is five losses in the past six games and virtually no shot at the postseason after winning the NFC North at 12-4. They hoped to put together a win streak coming off a seven-point victory over Detroit.

Instead, the Bears blew several big opportunities in the early going. The offense stalled. Quarterback Mitchell Trubisky struggled and sat out Chicago’s final drive, throwing his status for this week’s game against the New York Giants into question.

The switch fueled speculation that he was benched in favor of Chase Daniel. Nagy, however, insisted it was because of a right hip pointer.

He said Trubisky was hurt when he took a knee from Michael Brockers as Troy Hill sacked him near the end of the second quarter. Though he led an 80-yard touchdown drive early in the third, his hip tightened as the game wore on. The offense stalled and the Bears once again came up short.

The Monsters of the Midway held their opponent under 20 points for the third time in four games and took the ball away on Los Angeles’ first two possessions, only to watch the offense come away empty-handed.

After Chicago’s Eddy Pineiro missed a 48-yard field goal wide left on the opening drive, Eddie Jackson forced a fumble by Todd Gurley on Los Angeles’ first play from scrimmage. Ha Ha Clinton-Dix recovered near midfield. Nagy then opted to go for it on fourth-and-9 at the Rams 31 rather than try a field goal, and Trubisky threw an incomplete pass intended for Taylor Gabriel.

The Rams’ second possession ended when linebacker Roquan Smith intercepted Jared Goff at the Chicago 17. That led to another miss by Pineiro, a 47-yarder wide right.

Trubisky continues to flounder, the run game is going nowhere, the line is providing little protection, receivers are dropping too many passes, and the tight ends are contributing little. The Bears ranked 28th in scoring and 30th in total offense through Sunday.

The No. 2 overall pick in the 2017 draft, Trubisky’s completion percentage, yards per game and yards per completion are all down from last season. And he had a tough time against the Rams, going 24 of 43 for 190 yards with one touchdown and one interception.

The Bears will try to bounce back against the struggling Giants (2-8). New York has lost six straight and is coming off a bye.