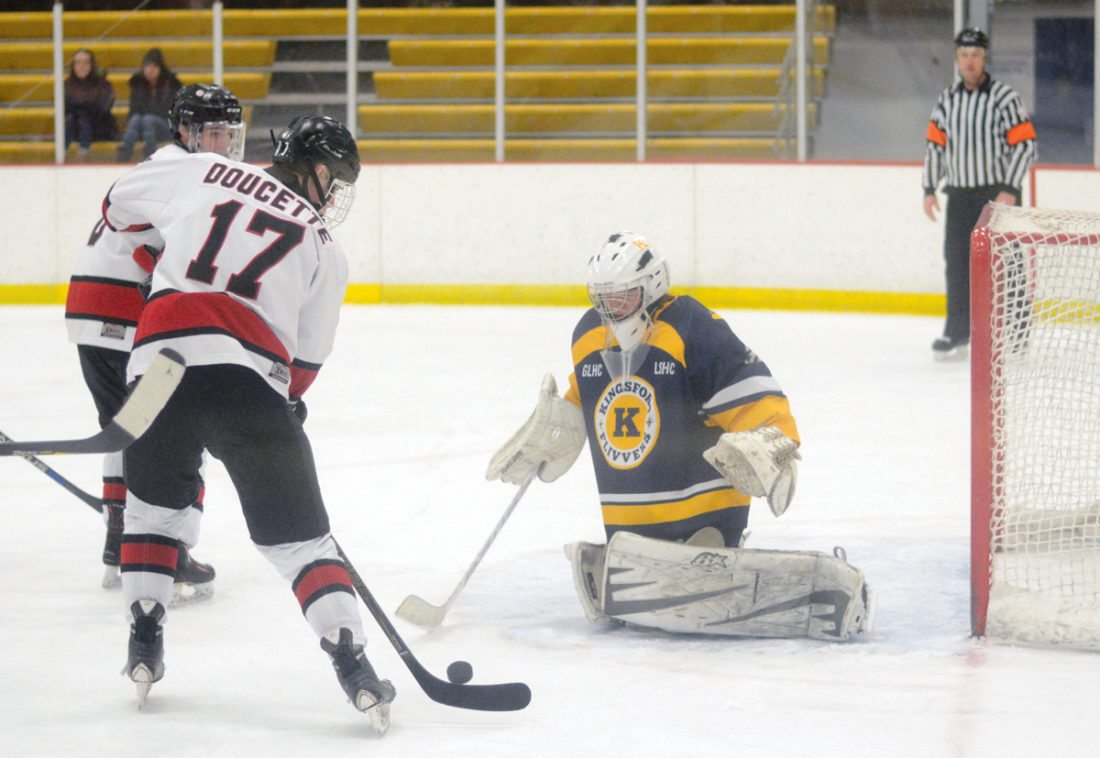 MARQUETTE — Even if the odds don’t appear to be in your favor in a hockey game, you can still come out as the hero.

That was the case for Kingsford forward Pete Ropiak during overtime on Thursday night. After a shot was blocked in the Marquette zone, Ropiak took off with the puck toward the Redmen net.

Two defenders converged on Ropiak as he crossed the Marquette blue line, but he still managed to get a shot on net that snuck past Redmen goalie Tyler Bergwall to give the Flivvers a thrilling 4-3 victory.

When asked about his game winner, Ropiak kept his assessment simple.

“When they came at me, I just was left with no choice to shoot it,” he said with a laugh. “It ended up being just a perfect shot.”

Flivvers head coach Dennis Murvich praised Ropiak’s performance as well as the rest of his team as they defeated Marquette for the second time in two tries this winter.

“That was crazy,” he said. “Not exactly how you’d see it playing out, but we’ll take it any way we can get it. Pete is one of our faster guys and one of our bigger, stronger guys. I thought he did a great good job of shielding the puck. He got two hands on that stick at the end and made a really nice shot to put it right in the corner.

“I think we’ve had three, four or five games in a row now where we’re starting to turn the corner a little bit. We’re a work in progress and not even close to where we want to be, but I like the direction where we’re headed.”

On the other bench, the feeling was much different. Marquette had several chances to win the game in regulation, but ended up falling in the extra session.

“I wasn’t happy with our structure and I think our discipline was lacking,” Redmen head coach Doug Garrow said. “I had no problem with our effort. I thought the guys wanted to win.

The Redmen struck early on with a goal in front of the net by Gaetano Cammarata. However, Kingsford tied it up late in the first period while on the power play. Bergwall made a nice sprawling save on a shot to the near post, but as a result, the net was open and Daunte Fortner knocked in an easy goal to make it 1-1 heading to the second period.

The scoring went the opposite way in the next frame as the Flivvers took the lead at the 6:51 mark. With Marquette getting whistled for a delayed penalty, Kingsford’s Dempsey Lauridsen snapped a shot into the net.

Marquette answered on a big power play opportunity. Kingsford’s Eamonn Weed was called for checking-from-behind major penalty, which gave the Redmen a five-minute power play. Just 30 seconds in, Marquette’s Tanner Phillips shot the puck low to the near post just out of the reach of Kingsford goalie Evan Hedtke to tie it 2-2.

The Redmen went up 3-2 early in the third period on an impressive goal by Nick Leafers. The junior forward managed to get the puck past Hedtke right before he crashed into the boards.

Marquette couldn’t maintain its slim lead, though. Kingsford knotted the game at 3-3 at the 6:47 mark when Fortner picked up his second goal of the night, again on a power play.

The Redmen started buzzing around the Kingsford net in the closing minutes of regulation, but couldn’t get the game-winner as Carter Peterson’s shot hit the post and Ethan Jones’ attempt was bobbled, then saved by Hedtke with one second left.

Marquette is off for two weeks before its next game, but Garrow thinks that will be a good thing.

“It’s nice for us and it comes at a good time because we’ve got three guys hurt right now and one is out sick,” he said. “We need the break and we need the rest. I’m OK with it. We’ve had a lot of games in January and with the injuries we can get some of those guys back. That will help us for the final stretch.”

Power-play opportunities: Kingsford 2 for 4, Marquette 1 for 3