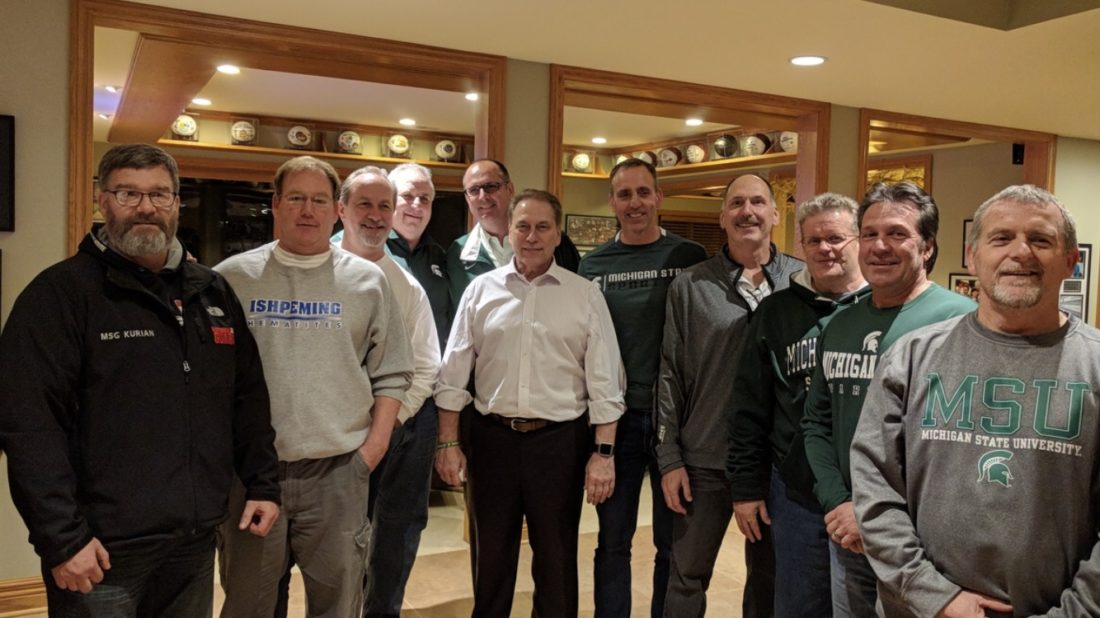 Michigan State’s highly-successful coach, a 2016 inductee to the Naismith Basketball Hall of Fame, got his start with the Ishpeming Hematites. He invited that 1977-1978 team to East Lansing last month.

“Watching Coach Izzo coach now, 40 years later, he is so similar to the way he coached his first year,” said Gary Merrill of Florence, Wis., a point for the Hematites. “He has not changed in coaching style nor in the class act that he has always been.”

The Hematites were coming off of a 3-18 season in 1976-1977 when Ishpeming Athletic Director Bruno Marana, knowing full well of Izzo’s playing accomplishments at Northern Michigan University and Iron Mountain High School, recommended the hiring of Izzo.

Merrill noted there were “many nay-sayers and a persistent effort from Izzo supporters” in the hiring.

The Hematites and the 22-year-old Izzo produced a 16-7 record with Holiday Classic, Mid-Peninsula Conference and district basketball championships.

Ishpeming beat Westwood and Negaunee for the district championship.

“Winning the district championship was the highlight of the season,” Merrill said.

“The newspapers and televised hyped the regional game because Iron Mountain was the highest-ranked team in Class C and we were underdogs all year but kept winning,” Merrill said. “Also it was a big deal because Coach Izzo played for Iron Mountain’s coach (Tom Clarke) in high school.”

Izzo then went on to NMU and MSU for assistant coaching positions. Hired as the MSU head coach in 1995, he led the Spartans to the 2000 national championship.

The idea to hold a 1977-78 Ishpeming High School basketball reunion began in April of last year. Kiril Spiroff, one of the players on that team, messaged Merrill suggesting it would “be nice to see who we could get together and make a trip to MSU before Coach Izzo retires.”

“A couple of phone calls later and Pete had it arranged,” Merrill said.

Ten of the thirteen players from the 1978 team made the trip to East Lansing.

“Coach Izzo, his team and his family were the consummate hosts,” Merrill said.

The team attended practice, met and had pictures taken with several of the players and toured the Breslin Center facilities including Izzo’s office. The Hematites were provided center-court seats, nine rows from the floor, for the Spartans’ Jan. 19 game with Indiana.

“We had pictures taken on the floor after the game and were treated to a post-game reception at the coach’s home,” Merrill said. “It was a great weekend made possible by a great coach, who is an even greater man, husband and father.”