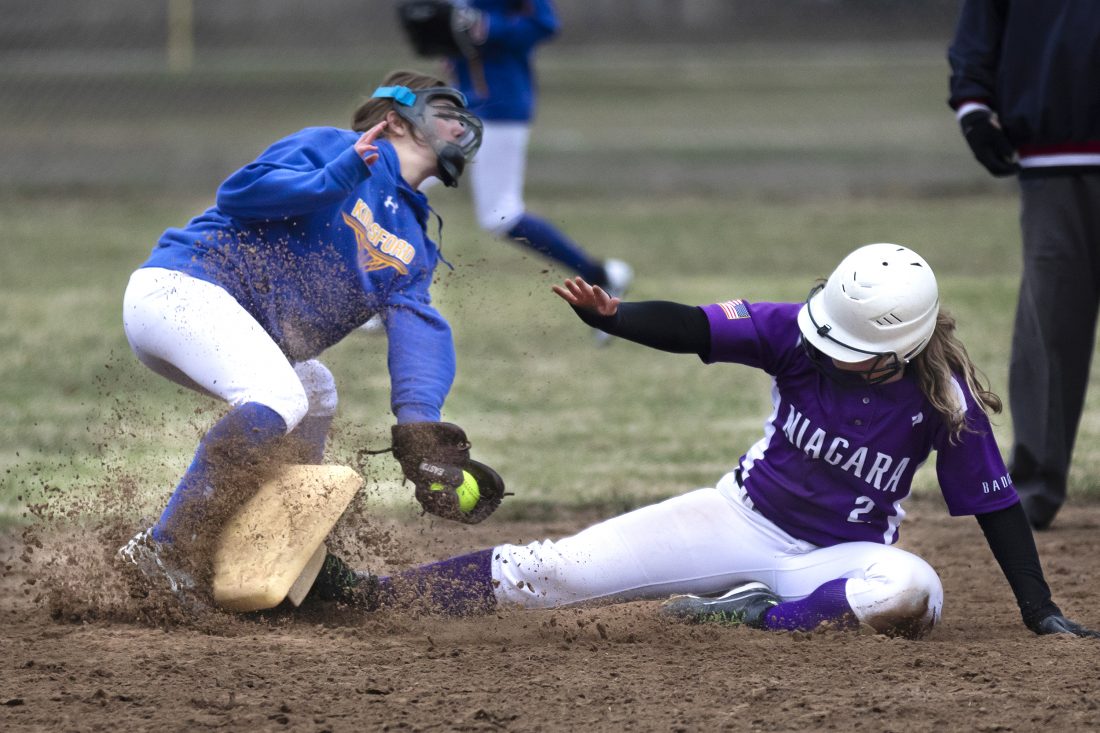 KINGSFORD — Kingsford held off Niagara 7-6 in the second game for a non-conference doubleheader sweep on Monday.

The second game ended after the third out in the fifth during a cold steady rain. The temperature hung in the low 40s but felt cooler with breezy and damp conditions.

Despite scoring 17 runs on the day, Flivvers coach Kevin Murdock said he felt the key hit evaded the lineup.

A six-run sixth propelled Kingsford. Kylie Mitchell had a triple. Allie LaVarnway had a double. Teagan Petschar and Emily Curtis each had two singles. Lizzy Cross had a single.

Abby Terrian had an inside-the-park home run for the Flivvers in the second game. Delaney Cram doubled. Macy Holmes, Claire Phillips and Danika Varda had two singles. Grace Roberts singled and tripled. Madisyn Johnson and Talia Wallis had a single.

” I love playing Kingsford. They play the game properly,” he said. “Kevin’s a great coach and he’s got a great program. I’ll play Kingsford every week if I can because we learn a lot from them.

“I got a lot of young players and a lot of first-year players. I’m trying to show them the right way of playing softball. I try to get them to watch a college softball game on TV and they’re not interested. But when you get to play a team like Kingsford and see how things are done right, it helps your team all the way through.”

The doubleheader was a chance for Kingsford to reestablish momentum on the diamond after being swept by Gladstone last week.

“We made a couple plays, got a couple hits,” Murdock said of the games against Niagara. “We stranded a couple runners — probably could’ve got a couple more runs early on. Hats off to them, they did their job when they needed to.”

Pitching has been a strong point so far this year for the Badgers.

“Our pitching has been fantastic. We lost to Wausaukee the other day and we didn’t walk a batter,” Blagec said. “This early in the year, your first concern is pitching and strike-throwing. Our pitching has been fantastic and I couldn’t be happier. I’m not surprised because I knew pitching was our strong point going into the season. Little disappointed with our hitting. We’re having trouble putting the bat on the ball but hopefully that’ll come with more repetitions.”