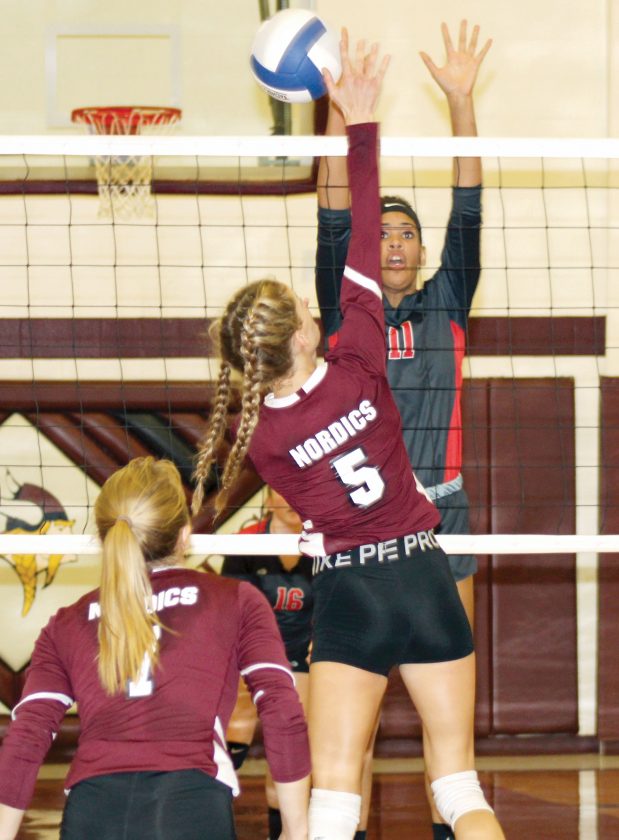 Nordics coach Sandy Haustein was pleased with her team’s performance on the evening.

“I thought the girls played pretty well tonight,” she said. “Our serving was a lot better than it has been. Briana Smith came through with 11 aces and had an all around good game for us. Chrislyn Inglese and Skye Ledzian also served 100 percent for us.

“I thought our back row was very aggressive to ball. There was a few times during the match we lost our focus and quit communicating, but we prevailed. The girls are improving each time they set foot on the floor. I tell them we win as a team, we lose as a team, and tonight these girls won as a team.”

Haustein also commented on the crowd that attended the match, and expressed that great support has been there throughout the season.

Forest Park, 2-2 in the Skyline Conference, is currently being led by interim head coach Kim Bjork

“It was a good learning experience for us,” she said. “Each set we let ND jump out to a lead and tried to work our way back into it but it just wasn’t enough. ND did a good job covering the floor and the were aggressive at the net.

“When we thought we were climbing back ND made some big plays, we are simply not on their level yet. There is potential with this group of girls we have at FP. Passing was one or our biggest downfalls, so that is something we will really focus on this week. We have our FP Invite coming up this Saturday. That should be another good test for us.”.