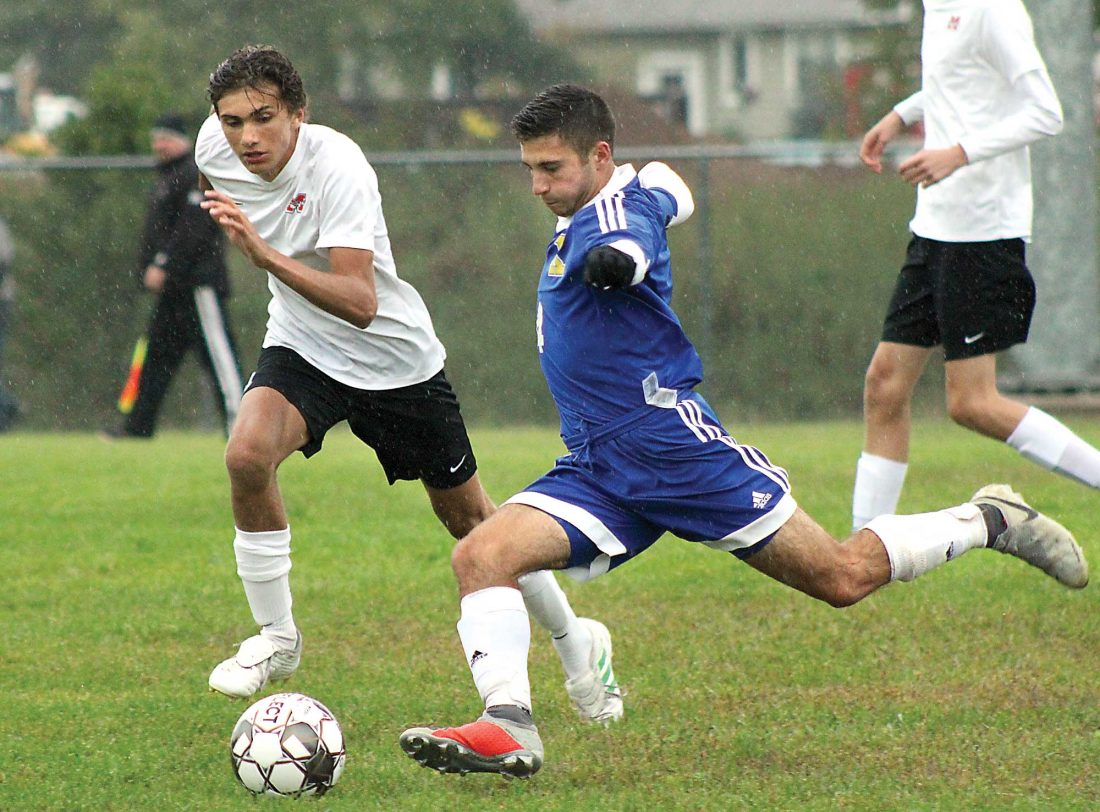 Theresa Proudfit/The Daily News Kingsford’s Ben Backlund looks to evade the Marquette defense Thursday evening at Commemorative Field. Backlund scored a goal in the second half as the Flivvers posted a 4-2 victory.

KINGSFORD – Kingsford held Marquette to five shots on goal and saw four different players find the back of the net in an impressive 4-2 boys soccer win Thursday at rainy Commemorative Field.

“We work with a lot of ball control, speed and stamina in practice,” Flivvers head coach Jeff Gordon said. “It paid off in this game.”

Kingsford got on the board first, just three minutes into the game. Dan Hellman passed to Marcus Michaud, who knocked it over to Kobe Gordon for a 20-footer into the left side of the goal.

The Flivvers increased their margin to 2-0 at the 24-minute mark of the first half, as Kobe passed to Brennan Phillips over to Michaud for a 10-foot strike.

A Marquette tally sliced the lead to 2-1 before halftime. But the Flivvers pushed it back to a two-goal game nine minutes into the second half. Michael Halley started the sequence with a feed to Gordon, who found a hole between two defenders with a pass to Hellman for a tap-in goal.

A penalty shot made it 3-2 with 24 minutes left in the game, but Kingsford notched an insurance marker with 12 minutes to play.

Zach Hanson initiated action to Gordon. He crossed to Ben Backlund, who buried his chance for the Flivvers fourth goal.

“We Kingsford kept Marquette on their heels the whole game,” coach Gordon noted, complimenting his defense. “Hanson, Bryce Quick and Wyatt Provencher did a great job stopping Marquette shots. Daniel Ferreiro and Carrisa Palmcook did a great job coming off the bench to help the team win.”

Kingsford’s next game is Saturday at the Lakeland Thunderbird Shootout.