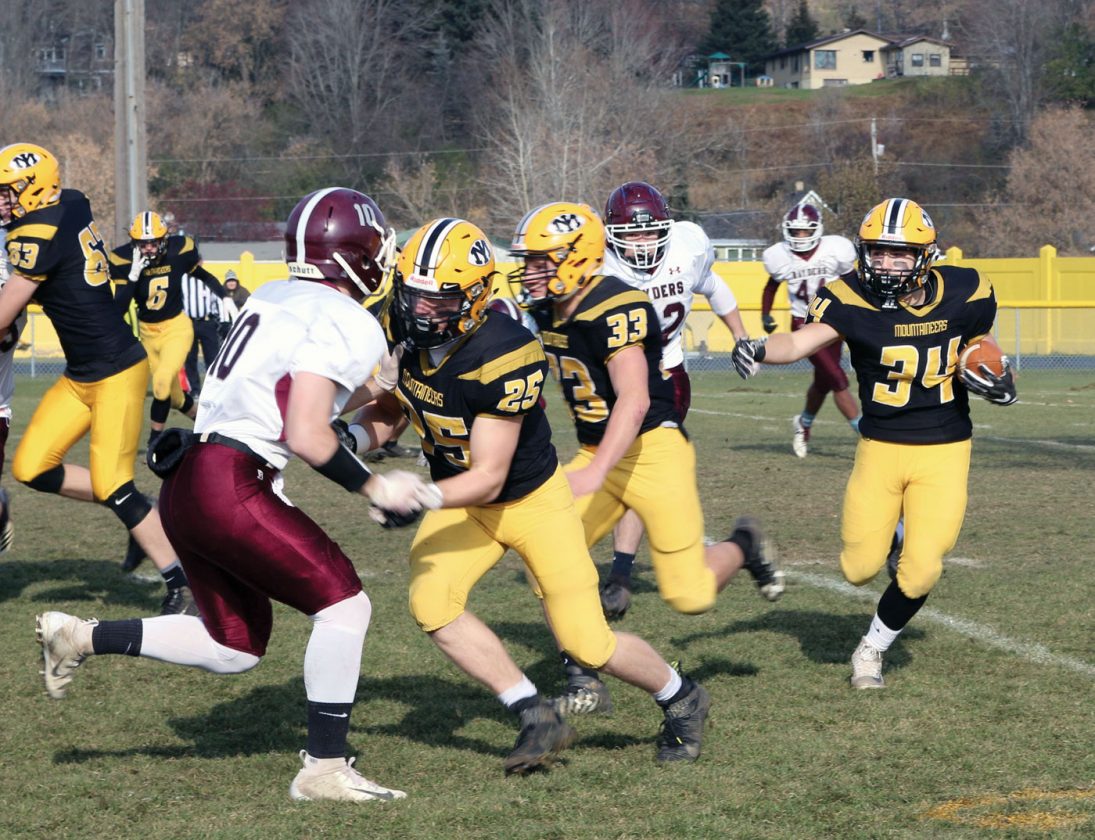 The Mountaineers led 34-0 at halftime and finished with 501 yards of total offense. Caleb Evosevich-Hynes ran for 210 yards and two touchdowns and caught a 25-yard pass from Marcus Johnson for another. Johnson had three TD passes in all.

As in last week’s game against Mancelona, IM scored first. Evosevich-Hynes capped an eight-play drive, all on the ground, with a 47-yard scoring run.

A sack by Jacob Dumais keyed an IM defensive stop on the Red Rayder’s first possession. A 6-yard pass from Johnson to running back Bryce Pietrantonio finished an 11-play-drive and another successful Evosevich-Hynes PAT made the score 14-0 Mountaineers.

As the first quarter ended, a sack by IM’s Jon Carrion stopped Charlevoix. Six plays later, Evosevich-Hynes found the end zone from 2 yards out and kicked another PAT to extend the Mountaineer lead. A seven-play drive for the Mountaineers, which included a Charlevoix personal foul penalty, ended with a 9-yard Johnson pass to Colin Visintainer on third and five and made it 28-0.

Three plays into Charlevoix’s next drive, Caleb Burklund recovered a Red Rayder fumble and returned it 10 yards to the Charlevoix 34. Johnson found Evosevich-Hynes for a 25-yard touchdown strike and a 34-0 lead. The first half ended with a Pietrantonio interception halting a Charlevoix drive.

A Dumais interception — showing his athleticism and wingspan — gave the Mountaineers a lift early in the second half. After trading possessions, Johnson found the end zone on a 1-yard run. A pass to Dante Basanese for the conversion upped the lead to 42-0.

At that point head coach Robin Marttila called on the substitutes. Sophomore running back Gabe Richtig broke free for a 49-yard score to put IM ahead 48-0. Charlevoix got on the scoreboard when Alan Ritter returned the ensuring kickoff 93 yards for a touchdown and the Red Rayders added two fourth quarter touchdowns before heading home.

“It was a great day, the kids played great on both sides of the ball,” said Marttila. “Any time you get 501 yards total offense, you did some good things. Kudos to coach (Bucky) Johnson for the offensive game plan. We had great balance on offense again today. Caleb Evosevich-Hynes, he had an impressive day running the football.”

Charlevoix was penalized nine times for 73 total yards, while the Mountaineers were only flagged four times for 40 yards.

The IM defense surrendered 175 total yards to Charlevoix, with 118 of them coming in the rushing department. “We did a great job of stopping their offense, it’s the type of offense that’s hard to replicate in practice, and the majority of their positive yardage came late in the game,” said Martilla.

Carrion, Burklund and Pietrantonio led the Mountaineers in tackles and Carrion led in sacks.

Marttila made sure to acknowledge a group of volunteers who came together at Mountaineer Stadium at 7:30 a.m to remove an inch-and-a-half of snow from the field.

Up next for the Mountaineers is a state quarterfinal matchup with the Traverse City St. Francis Gladiators, who defeated McBain 14-6 on Saturday afternoon. Iron Mountain will have home field advantage, so the game will be at Mountaineer Stadium on xxxce