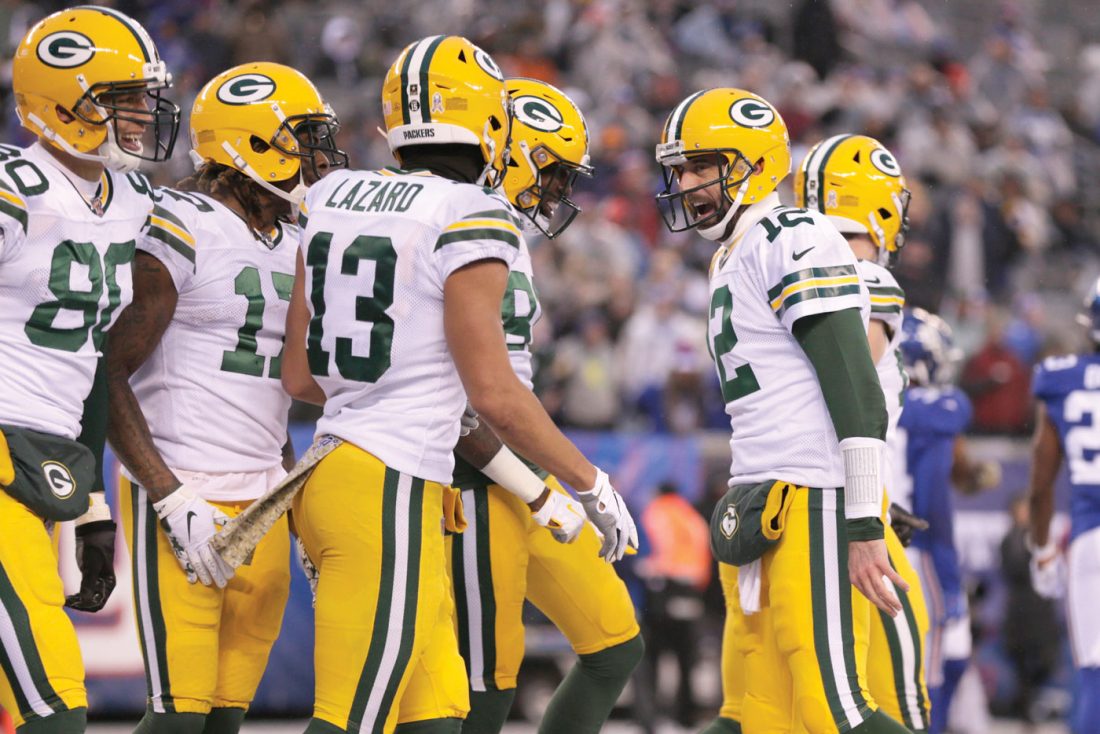 AP Photo Aaron Rodgers, right, celebrates after throwing a touchdown to Davante Adams during the second half against the New York Giants, Sunday.

GREEN BAY, Wis. (AP) — The Green Bay Packers bounced back from a blowout loss to the San Francisco 49ers by beating the New York Giants 31-13 on Sunday.

The victory lacked a lot of style points, but the Packers returned to form in improving to 9-3.

Quarterback Aaron Rodgers had a big day with four touchdown passes. Without a running game to lean on, Rodgers took things into his own hands. He made a couple of big completions under heavy pressure, alertly caught the Giants with 12 men on the field to throw his third touchdown pass and wriggled out of a sack for his fourth touchdown.

“There were a number of other plays in that game where you’re just like, ‘Wow,'” coach Matt LaFleur said on Monday. “But that’s the standard that he’s set because he’s done it so many times.”

The passing game wasn’t wholly dependent on Davante Adams, though he did lead the team with six receptions and two touchdowns. The first touchdown was set up by a 43-yard completion to Allen Lazard and the second touchdown came on a 37-yard touchdown to Lazard.

The Packers badly need someone to emerge and Lazard, who started the season on the practice squad but finished the day with three catches for a career-high 103 yards, could be that guy.

“He’s really taking advantage of his opportunities,” LaFleur said. “He not only did it on offense but he did it on special teams. Matter of fact, we had two offensive players of the week in Aaron Rodgers and Allen Lazard. And then Allen also was our special teams player of the week. I think that’s a great message to everybody in that locker room.”

Turnovers and production on third down, two problems against the 49ers, were no problem at all against the Giants.

Ball security has been a hallmark of the Packers throughout Rodgers’ tenure as quarterback. From 2008 through Sunday, the Packers are plus-104 in turnovers. That’s the second-best mark in the league — far behind New England’s plus-151 but far ahead of Seattle’s third-ranked plus-67.

The Packers continue to struggle against opposing tight ends. Over the previous five games, Green Bay gave up an average of 100 receiving yards to the opponents’ No. 1 tight ends. New York was without its top two tight ends, leading receiver Evan Engram and Rhett Ellison, but rookie Kaden Smith caught six passes for 70 yards. Smith entered the game with six catches for 18 yards.

One day before his 36th birthday, Rodgers threw four touchdown passes with zero interceptions against the Giants. He has 23 such games in his career, tied with Brett Favre for fourth most in NFL history behind Peyton Manning (35 games), Drew Brees (34) and Tom Brady (29). The performance stood in stark contrast to the loss at San Francisco, where he was 20 of 33 passing for just 104 yards with one touchdown and one fumble that put the Packers into an early hole.

Through 12 games, Green Bay has minus-8 yards on punt returns. Tremon Smith gave the Packers their longest return of the season in the first quarter, a 3-yarder that ended with his fumble going out of bounds. On Monday, the Packers released him.

Veteran right tackle Bryan Bulaga suffered a knee sprain during the first quarter at San Francisco. He was not expected to be in the lineup on Sunday but played every snap and had a key role in holding the Giants without a sack.

“I told him how proud I am of him after the game,” Rodgers said. “I think it sets a great example about the difference between being hurt and being injured. For Bryan to push through the pain and to play, that’s why he’s a leader of our football team and he has the respect of the guys. Not many people probably after the injury last week thought he was going to be available this week and who knows (how many) weeks after that. I think he’s just stubborn enough to want to get back out there every week.”

Green Bay returns home to face Washington (3-9) and Chicago (6-6). Both teams have had disappointing seasons but have won two in a row. A Week 16 showdown at Minnesota could decide the NFC North.