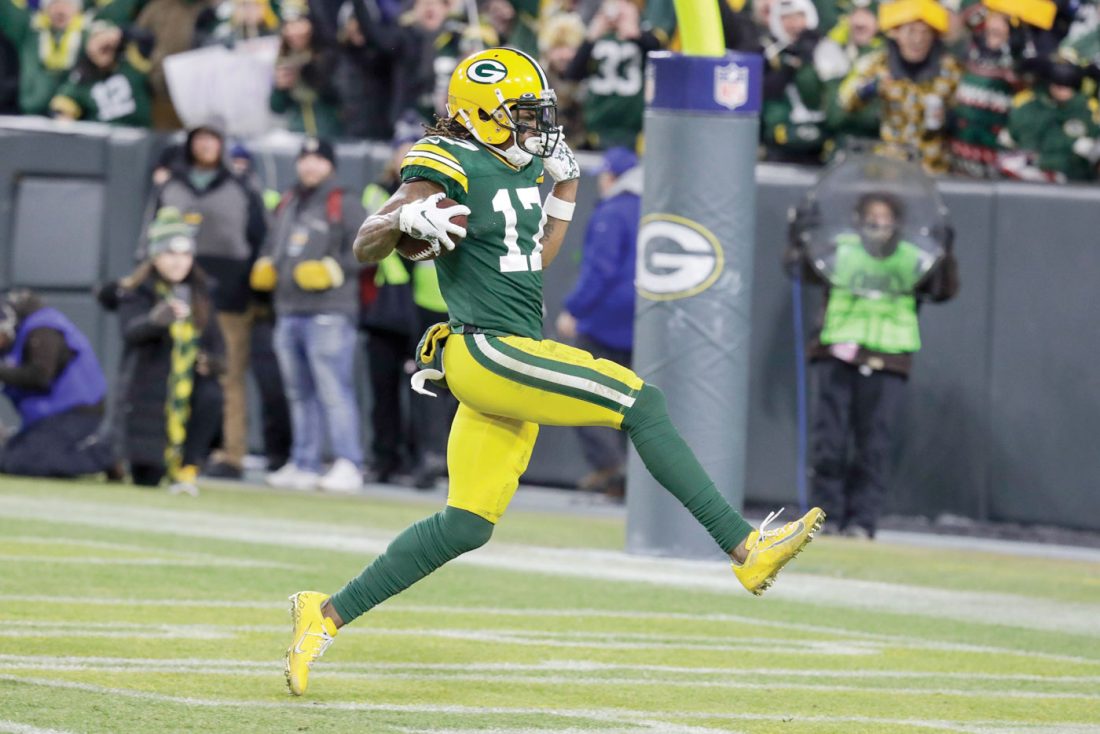 AP Photo GREEN BAY’S DAVANTE Adams runs to the endzone for his touchdown catch during the second half against the Seattle Seahawks Sunday.

The Green Bay wide receiver wasn’t a five-star recruit. He wasn’t the biggest, fastest or most athletic. He wasn’t even a football player until late in his high school career.

But the two-time Pro Bowler has worked himself into being Aaron Rodgers’ top option and is one win away from playing in his first Super Bowl. Adams and the Packers will face the San Francisco 49ers in Sunday’s NFC championship game, just a few miles from his native Palo Alto, California.

“I’m trying not to (freak out),” Adams said on Wednesday. “But, I mean, we’re all excited in here. This is a great opportunity. We understand what’s in front of us.”

Adams, who caught two touchdowns and had a franchise playoff-record 160 yards in a win over the Seattle Seahawks last Sunday in the NFC divisional round, now must face one of the top defenses and one of the best cornerbacks.

“Well, I mean, it doesn’t change, really,” Adams said on facing Richard Sherman. “He’s definitely a great player, and people have said a lot about whether he’s fell off or what not and I don’t see that. I see that he’s still the same guy, still making plays.”

Sherman’s 35 interceptions since entering the league in 2011 are the most among active players during that span. The 31-year-old is looking to make his third Super Bowl appearance after being one of the key parts to the Seahawks’ back-to-back Super Bowl appearances in the 2013 and 2014 seasons. Though Sherman’s resume is longer than Adams’, the respect between the two is mutual.

“He’s very good at beating man coverage,” Sherman said. “When guys that are hard to cover because of their quickness, their feet, their size and their hands, it’s tough in the zone. They’ve got a good quarterback who gets the ball in the right spot. Davante’s definitely their best guy beating man to man.”

What makes Adams special is his release off the line of scrimmage. It’s a skill he acquired during his years as a basketball player and one that he works on tirelessly.

“I’d say obsession is a good word for it,” he said. “… I don’t know at which point exactly it turned into that, but once I started realizing I could lose people at the line of scrimmage and essentially run a route on air, I figured that that was the way to go. So I just put a lot into that and obviously I made it a big part of who I am.”

Since Green Bay drafted Adams in the second round in 2014 out of Fresno State, the 6-foot-1, 215-pounder has grown from being Rodgers’ third or fourth option behind the likes of Jordy Nelson and Randall Cobb to one of the most productive pass catchers in the league. Adams was on pace for his second straight 1,000-yard season before a turf toe injury in Week 4 sidelined him four weeks. Adams finished with 997 yards.

Rodgers said what has changed most about Adams in their six seasons together is Adams’ ability to use his mind to his advantage.

“Because he’s made certain plays throughout the year where him and I have had conversations either on the sidelines or in the locker room after the game and he will bring up certain plays from previous games or previous years,” Rodgers said.

Adams said that recall has just come with time. He remembered a game last season against the Cardinals when the two linked up for a 13-yard touchdown in the back of the end zone after Rodgers gave Adams a simple point.

“When you get a certain amount of reps under your belt, I think that that’s what puts you in position where now you can kind of read each other’s body language,” he said.

The Packers will need more than body language to defeat a 49ers team that dominated them 37-8 in Week 12. The lopsided loss was Green Bay’s worst of the season. San Francisco will no doubt look to take away Adams.

“You have to understand what they’re going to try to do to us, and obviously taking away 17 has got to be right near the top of the list because he’s so talented,” Rodgers said. “So we’re going to have to find ways to get him the football still. The best offenses that we’ve watched over the years, you still find a way to get the ball to your go-to guy.”