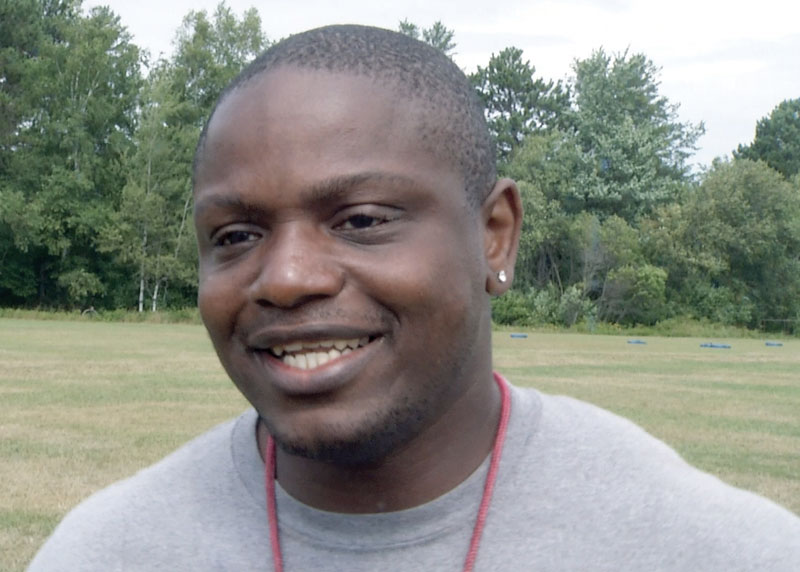 GWINN — The Gwinn Area Community Schools and the greater Forsyth Township community is understandably in mourning after the death of Modeltowners varsity head football coach Dion Brown on Wednesday evening.

The GACS, through Superintendent Sandra Petrovich, released a short statement about the loss.

“He was big in heart, big in spirit and big on the field. Our condolences to his family and our entire community.”

In conjunction with Ishpeming Public Schools, the Gwinn at Ishpeming junior varsity and varsity boys basketball games were postponed on Thursday night. No makeup date had been determined on Thursday.

Petrovich said decisions hadn’t been made as of Thursday morning on other Modeltowners varsity games this week, including tonight’s girls basketball games at Calumet and Gwinn’s entry into the Upper Peninsula Championships wrestling tournament scheduled for Marquette all day Saturday.

Brown, 37, had starred on defense at Northern Michigan University before becoming Gwinn’s varsity head coach in 2014.

He took over a struggling Gwinn program that nearly had to fold operations during the 2013 due to injuries and a lack of available players.

He had coached the JV team in 2013 after coming from an assistant’s position at Ishpeming High School.

“My job is to change the whole culture around here,” Brown said at the time of his hiring in 2014, “but it’s all up to the kids. If they think they can compete, they will compete.”

And while Gwinn only went 1-8 in his first year, losing by less than 20 points in only one game, the Modeltowners showed steady improvement until they made the MHSAA playoffs two years later.

In 2015, Gwinn finished 3-6, then in 2016 completed a 6-3 regular season before a loss at Iron Mountain in the opening round of the MHSAA Division 7 playoffs.

“I am saddened to hear of Dion’s passing,” IM head coach Robin Marttila said. “I have gotten to know him pretty well over the past five years. Dion revitalized Gwinn Football and put that program back on the map. He was just a great person. His love for the game of football and how his kids believed speaks to the person he was.”

It was Gwinn’s first appearance in the postseason since 1999, when the Modeltowners reached the state semifinals in Division 6. And it was only the school’s third berth in the playoffs that began in the mid-1970s.

For that achievement, the Upper Peninsula Sportswriters and Sportscasters Association named Brown its Large Schools Coach of the Year for 2016, while four Gwinn players earned All-U.P. recognition, too.

Brown also led GHS to its fourth-ever playoff berth in 2018 after another 6-3 regular season that ended in an opening-round playoff loss at Ishpeming.

Brown was also known for leading his teams in making a difference in the community.

In just one instance, WLUC-TV6 cited the Modeltowners in 2018 for giving up a Sunday afternoon in the summer to help an elderly neighbor clear and stack wood.

“Dion was a great guy and coach,” Norway head coach Scott Popp said. “I’ve always enjoyed talking with him cause you didn’t know what he was going to say. He was a serious and a funny guy at the same time. Watching what he did for the kids on the field and off the field was a great thing. The kids believed in him. He had their trust in everything. I hear a lot of stories how he was off the field about helping kids out in the community, that’s a great coach and mentor for kids. He wanted to help out everyone. It just wasn’t football, it was every kid. He is truly going to be missed on and off the field. That’s a tough blow to that school and community.”

In his high school days in Illinois, he starred in football and track and field at Bloomington High School. He set a school record in 2000 by rushing for 1,992 yards in 11 games, averaging 8 yards per carry and scoring 23 touchdowns, according to an online report from The Pantagraph of Bloomington.

But he went to Harper Junior College and NMU as a standout defensive back before later playing for the Bloomington Extreme indoor football team.

He was the Wildcats’ Most Valuable Defensive Back following the 2003 and 2004 seasons. He also led Northern in kickoff returns those two years, returning a total of 45 kickoffs in that time and averaging just under 20 yards per return.

And he was an All-GLIAC Second Team selection for the ’04 season under head coach Doug Sams.

Honor Credit Union at all its locations has set up an account to receive donations for Brown’s family to honor his legacy. For information on that, call 475-4149.