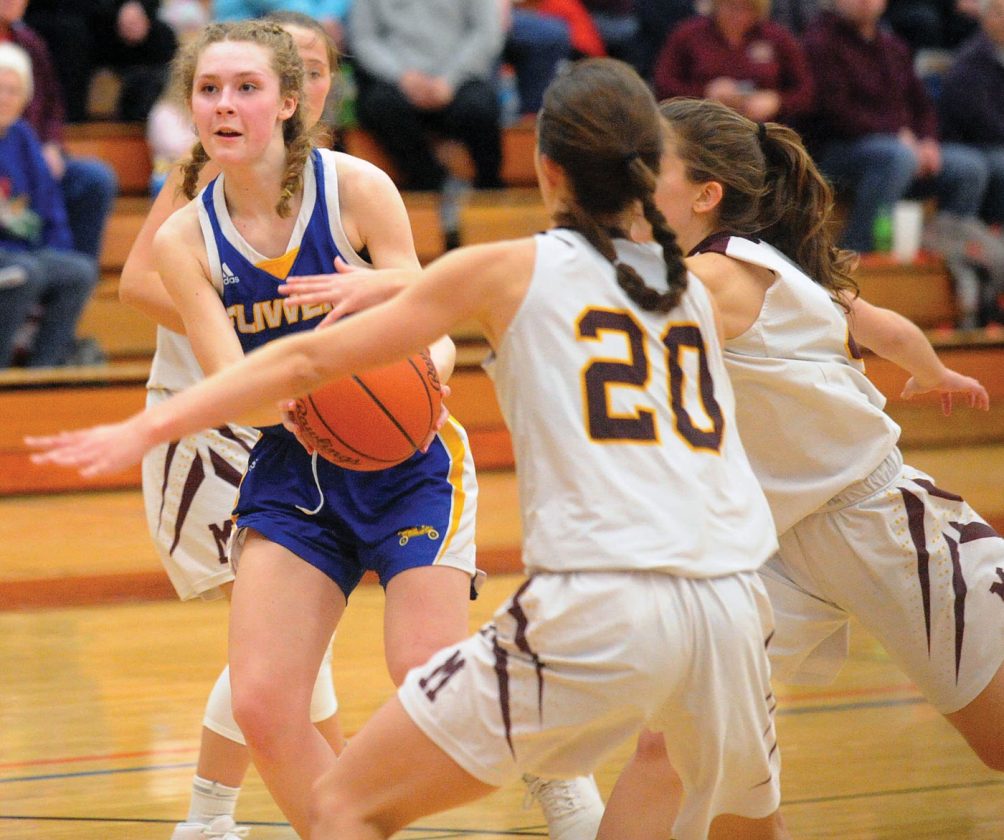 Menominee junior Emma Anderson entered Monday’s game needing 19 points for 1,000 in her career and got there with a 3-pointer from the corner with 5:03 left to play, becoming the ninth player in school history to accomplish the feat.

“It feels good just to get it out of the way,” Anderson said. “I feel like that was kind of a key moment in the game too so that just made it even better that I made the shot because I was not having any luck before those two went down. I missed that first wide-open one and then I came back and made one right away so that kind of helped and I felt better. Once I got it made it a lot easier to focus on the game and we went back and finished it off as a team which is the best part of the night.”

Kingsford’s Maggie Strehlow tied the game 46-46 before Anderson got open inside for an easy shot off the glass. It was the next possession in which she hit the milestone triple.

It seemed as if that was the spark the Maroons were looking for all night as Menominee closed the game out after that and it was Anderson who iced it in the end with 25.6 seconds left as she cashed in on two free throws. She finished with 22 points as Menominee improved to 17-0.

“As a team, I thought we got stops when we needed to,” Menominee coach Lucas Chouinard said. “It wasn’t our best game defensively, but we got key stops and were stayed poised on the offensive end and got the baskets we needed to at the end.”

After falling behind 15-10 after the end of the first, Kingsford fought back in the second while Anderson was resting on the bench as Brooke Kriegl scored a basket and split a pair of free throws followed by Olivia Olkkonen draining a triple from the top of the key to cut the deficit to 17-16. Following a 3-pointer from Menominee’s Erin Barrette, back-to-back baskets from Kate Cook and Strehlow tied the game at 20 and forced Menominee into a timeout with 2:45 left in the half.

Both teams traded buckets for the next two minutes until Barrette and Anderson knocked down 3-pointers on consecutive possessions to head into halftime with a 30-26 advantage after Kingsford’s attempt at the buzzer rimmed out.

The Maroons’ struggled in the third quarter with their help-side defense and Kingsford’s Christy Glodowski was able to get free for 12 of her 13 points including two 3-pointers. That, coupled with Kingsford’s work on the offensive glass was enough to keep the Flivvers in the game heading into the fourth trailing just 44-42.

“Our guards did a good job of knocking down some shots and our bigs were really active around the rim on both ends of the floor,” Kingsford coach Lisa Harry said. “We did a lot of things well tonight, we just have a few things we need to clean up that didn’t go so well. We have another chance at them in a week and a half during districts so we’ll see what happens then.”

After Anderson notched her 1,000th point, Kingsford got within two (53-51) when Glodowski split a pair of free throws, Ali Doolittle converted a three-point play and Kriegl turned a steal into a fastbreak layup, but Menominee finished the final three minutes of the game on an 8-2 run.

In addition to her game-high 22 points, Anderson also hauled in a game-high 11 rebounds; Barrette finished with 16 points (4-of-5 3-pointers) and four steals and Nolde added 10 points. Glodowski led Kingsford with 13 points and Strehlow had 10.

Kingsford (7-10) hosts Iron Mountain in a rivalry matchup on Friday. 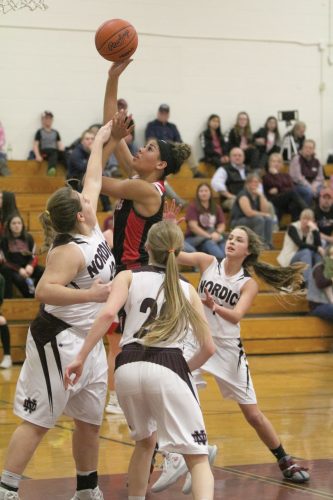