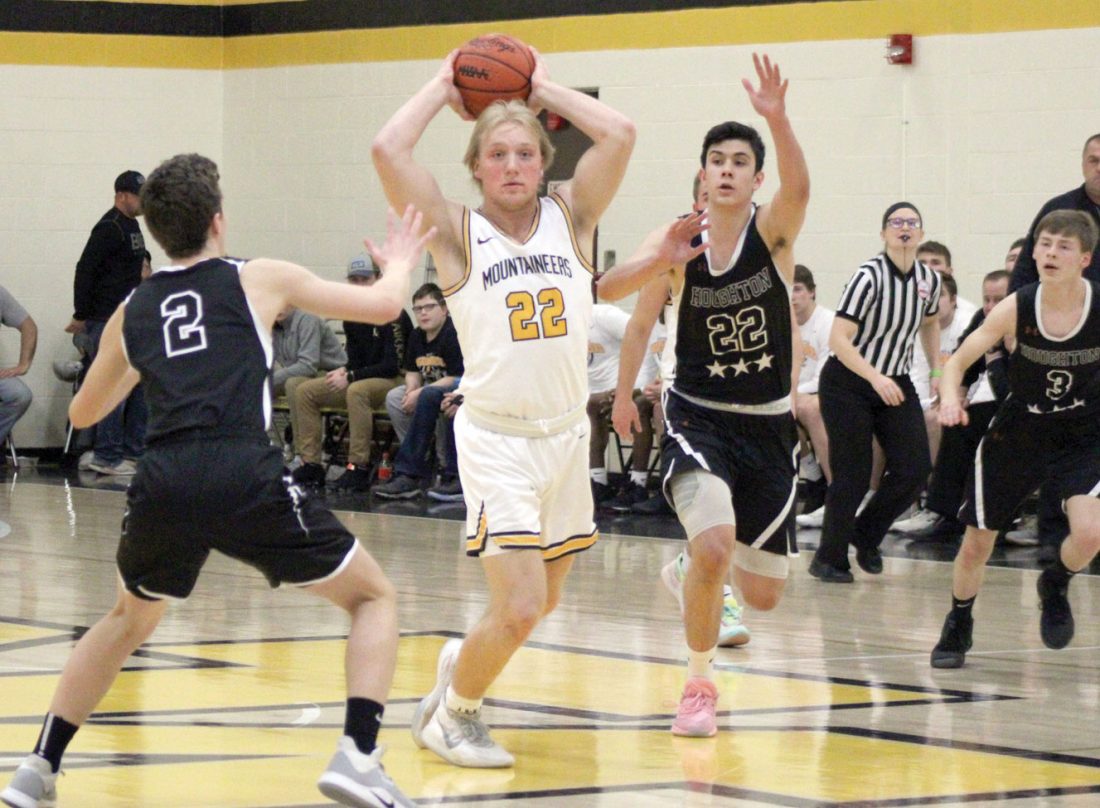 IRON MOUNTAIN — Iron Mountain drained 17 triples and improved to 18-0 with a 91-63 win over Houghton in non-conference boys basketball Thursday.

Houghton had 10 threes of its own, including six by the game’s high scorer, Brad Simonsen, who finished with 34 points.

The Gremlins, however, had no answer for Iron Mountain’s one-two punch of Marcus Johnson, 33 points and eight assists, and Foster Wonders, 31 points on 7 of 12 beyond the arc.

“Wow, what a game,” said Mountaineers coach Bucky Johnson. “Simonsen can score, but he had to work for his buckets.”

Iron Mountain led 42-24 at halftime and outscored Houghton 24-22 in a third quarter that saw six threes by the Mountaineers — including three from Johnson and two by Ricky Brown — and four by Houghton.

“They play a little different type of defense, too,” Johnson said of the Gremlins. “The kids figured out how to attack it … it was a good win.”

Iron Mountain will host Gladstone on Tuesday in another non-conference game.

Keall Emmers led all scorers with 18 points, while Tommy Showers added 14 points, and Tommy Peltoma chipped in 11 points for the Trojans who improved to 8-10 on the season.

“We were finally able to overcome a halftime deficit and found a way to win,” ForestParkheadcoach Kurt Lehmann said. “We definitely battled and showed a lot of heart tonight.”

Riley Hixon drained 16 points for the Bobcats, while freshman Evan Johnson chipped in 12 points, in the losing effort. Florence slipped to 16-6 to end their regular season, losing three of their last five games.

“Forest Park made a few more plays down the stretch than we did,” said Florence head coach Bryan Bomberg.

“I told my guys I was proud of our toughness tonight, as we’ve not always had that throughout the season. I’m hopeful and confident that we take away from tonight’s close loss, how to close out games like this come postseason time.”

Forest Park returns to action tonight, as they travel to Carney-Nadeau for a Skyline Central matchup. The Trojans wrap up their SCC and regular season schedules on Tuesday when they host North Central.

The Bobcats, as a No. 3 seed, open up Division 5 WIAA post season tournament play on Tuesday, when they host long time rival Niagara, the No. 14 seed in their Sectional.

Tip off from Florence is 7 p.m.

The Patriots also got a double-double from Jacob Kessel with 16 points and 10 assists and wrapped up the regular season with a 9-12 record.

“Our team is coming together and playing really well right now,” said coach Jeff Zerbst. “We now enter tournament play with a load of confidence after going the distance with Wausaukee the other night and getting a big W tonight.”

Goodman-Pembine, the No. 8 seed in WIAA Division 5 Sectional No. 2, will host No. 9 Phelps at 7 p.m. Tuesday at Goodman.

Owen Wysocki added 15 points for the Patriots, who led 46-23 at halftime.

RAPID RIVER – Norway fell behind 17-6 after one quarter and never recovered, falling to Rapid River 62-44 in Skyline boys basketball.

Kody Hendricks led the Knights with 17 points. Tony Demars poured in 24 for Rapid River, leading all scorers. Tyler Sundling added 17 for the Rockets.

“We got beat in every aspect tonight,” Norway head coach Jeff Gallino said. “We came out flat and they took it to us. Demars and Sundling had nice games for them.”

Ethan Hischke joined Goniesse in double figures with 11 points for the visitors.

Charles Schaefer had six points to pace the Badgers, who slipped to 3-19.