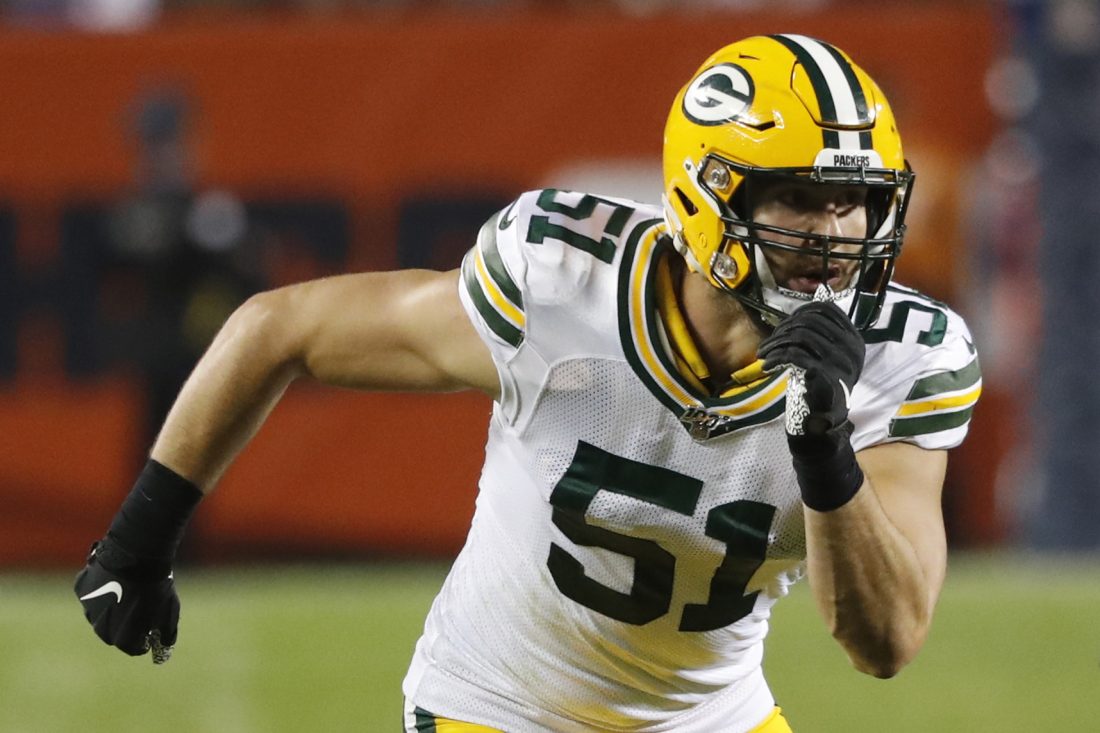 FILE - In this Sept. 5, 2019, file photo, Green Bay Packers linebacker Kyler Fackrell is show in action against the Chicago Bears during an NFL football game in Chicago. The New York Giants are giving free agent linebacker Kyler Fackrell a chance to show that 2019 wasn't as bad as the numbers made it look. It's a one-year shot for Fackrell to prove his 10-1/2 sack season in 2018 with the Green Bay Packers wasn't a fluke.(AP Photo/Charles Rex Arbogast, File)

The New York Giants are giving free-agent linebacker Kyler Fackrell a chance to show that his 2019 season wasn’t as bad as the numbers suggest.

It will cost the Giants, too. General manager Dave Gettleman has given Fackrell $4.6 million to be New York’s edge rusher.

It’s certainly a gamble. Fackrell’s stats took a nosedive last season with the Packers. He played in 16 games and made 23 tackles, with one sack, two tackles for losses and 10 quarterback hits.

While that may sound like the 28-year-old didn’t play well, there are extenuating circumstances. Green Bay signed linebackers Za’Darius Smith and Preston Smith in the 2019 offseason and they took away plays from Fackrell.

He got seven starts in his big season in 2018. He got none last year.

“I believe I am better than a one-sack guy and that’s what I am going to try and prove,” Fackrell said Thursday on a conference call. “Again, let me say I got better this last year. I think I am a better player last year than I was the year before and I’ll be a better player this upcoming year.”

Fackrell described himself as a versatile 3-4 strong-side outside linebacker who loves to rush the passer and takes pride in being able to drop back in coverage.

The former Utah State product said he had 200 fewer plays last season and felt he put more pressure on opposing quarterbacks than in 2018.

His goal this year is to become a consistent pass rusher.

“Obviously, I want the sacks, I want the pressures,” Fackrell said. “Ideally, those things would kind of go hand in hand. But again, I think there are a lot of things that I definitely want to improve on.”

Fackrell would like to get more tackles for loss and become more of a factor in stopping the run.

In coming to the Giants, Fackrell will work with two old friends — inside linebacker Blake Martinez and defensive coordinator Pat Graham, who was a Packers linebacker coach in ’18.

Martinez also signed with the Giants recently as a free agent. Graham was hired away from Miami by new coach Joe Judge to run the defense.

The 6-foot-5 Fackrell has not had a chance to talk to Graham about his role on a young linebacker corps that also features Lorenzo Carter and Oshane Ximines.

“This last year he was a role player that stepped in and did a lot of great things,” Martinez said. “I think he is one of the best zone-coverage linebackers in the NFL in my opinion. What he has been able to do for us and what he’s been asked to do, he’s done a phenomenal job and I know he is going to be a great asset to this team and show people a lot of great things this year. “