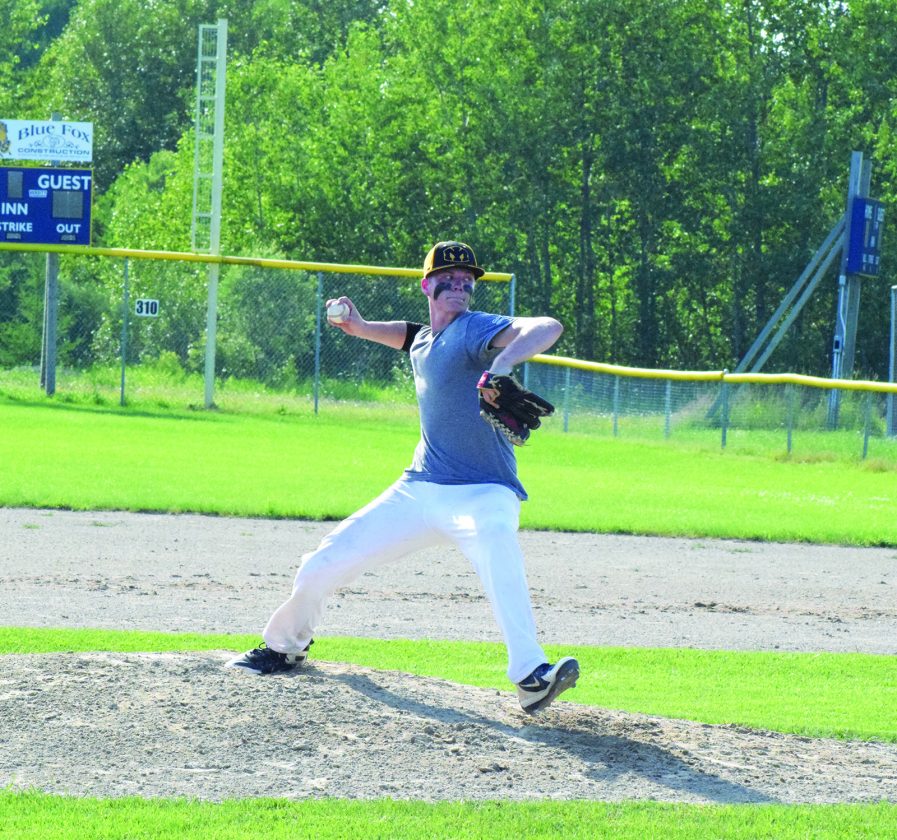 For the Daily News

BARK RIVER — The Iron Mountain 19U team grabbed a 4-3 lead early and then added three more runs in the late innings to pull away for a 7-3 road win over Bark River Wednesday night in a nine-inning game in the Upper Peninsula Under-19 Baseball League.

IM (9-4) took advantage of multiple Bark River errors to jump ahead 2-0 in the top of the first, but the Bucs returned the favor scoring two runs on Golds errors in the bottom half of the inning to knot the score at 2-2.

Iron Mountain then surged ahead to a 4-3 lead at the end of the third and tacked on a single run in the sixth and two more in the eighth to seal the win.

“The beginning of the game was a tight game,” IM manager Paul Julian said. “We put a couple up right off the bat. They have a great program. All in all, it was a tight game. We got lucky to put some up at the end there.”

Caleb Johnson relieved Blake Julian in the second inning and earned the win on the mound, pitching eight strong innings in which he struck out seven while surrendering just two hits and two walks.

“He’s as solid as they come,” manager Julian said. “He’ll be pitching for UW-Oshkosh next year. We’re going to miss him. We’re losing him off our high school team because he graduated, so we’re enjoying him while we can because next year he will be age-eligible to play. We get him for one more year after this.”

Zach Englund got the start for the Bucs but was pulled before the start of the fifth inning when he felt like he pulled a muscle warming up. Wyatt Riley pitched the remainder of the contest, allowing three runs on four hits while striking out two and walking three.

“Zach started the game for us and pitched a good four innings, then he said he had a muscle pull or something. We kind of took him out as precaution, but I thought Zach pitched really well at the start of the game. There were a couple errors in the first inning that gave them a couple runs,” Bucs manager Matt Richer Jr. said. “Wyatt came in, and I don’t think he was expecting to pitch today, but he was throwing strikes and he kept us in the game. I thought he pitched a heck of a game.”

The Bucs (4-11), who dropped their fourth straight, were limited to just four hits on their second day of a back-to-back. They were swept at Menominee Tuesday after taking a long break for the Fourth of July.

“We’ve been putting the bat on the ball,” Richer said. “We’ve been hitting the ball hard the last three or four games, it just seems like we can’t find a gap or anything. It seems like everything we hit is right to people or we get thrown out at second and stuff like that.

Iron Mountain starting pitcher Blake Julian was forced to leave the mound after not feeling well through just one inning of play.