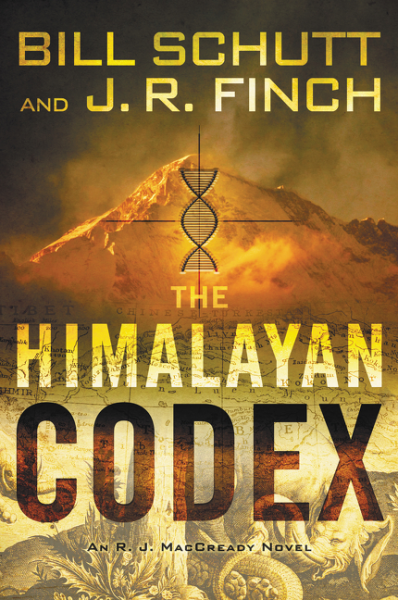 Bill Schutt and J. R. Finch continue the adventures of naturalist R. J. “Mac” MacCready in his latest trek which leads him on a search for the mythological Yeti in this well done science fiction thriller, “The Himalayan Codex.” (William Morrow, 384 pages)

In 1946, just after the devastating Second World War, Captain R. J. MacCready — military man, explorer and zoologist — is commissioned by the Metropolitan Museum of Natural History to travel to the Himalayas to research a strange two-trunked mammoth.

But this is a cover for his real mission — ascertain whether an ancient codex said to be written by the Roman naturalist, Pliny the Elder, is valid.

In this text, Pliny refers to a new and ferocious race of humans. These creatures of the Himalayas, whom Mac nicknames “Morlocks” after the brutal race described in H. G. Wells’ classic science fiction story, “The Time Machine”, may have been the basis for the mythological Yeti.

But this new and very aggressive species has mastered the art of manipulating evolution and, therefore, pose a threat as the ultimate biological weapon.

In the post WWII period, in which the Soviet Union, China and the United States are vying for global supremacy, the hitherto unknown world of the Himalayas and its hidden environment populated with strange and deadly creatures pose potentially grave geopolitical consequences should the secrets of this remote region become known to the rest of the world.

For those who enjoy science fiction with a strong bent towards crypto-zoology, the MacCready novels of Bill Schutt and J. R. Finch are well worth reading.