‘The Body In The Casket’ by Katherine Hall Page 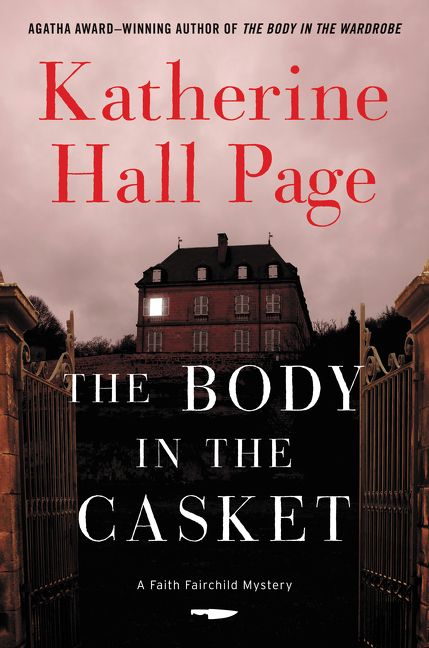 Max Dane, retired producer/director of a number of Broadway hit musicals, hires Faith Fairchild to cater a weekend house party to be held at his secluded mansion, Rowan House, to honor his 70th birthday.

Among the guests are principal characters involved in his last musical, “Heaven or Hell” — which proved to be a colossal box office failure.

Prior to the weekend festivities, one of the invited guests, Jack Gold, the set designer of the ill-fated play, dies, having jumped in front of a train.

A second guest, Bella Martelli, the costume designer from the production, also dies before the weekend, apparently of natural causes.

Things becomes especially sinister when a special delivery is made to Max Dane’s stately Rowan House — a casket was sent by someone set on murdering the retired Broadway legend.

In hopes of surviving his 70th birthday, Max Dane hires Faith Fairchild – as much for her skills as a detective as her talents as a cook.

Nine people are invited to the party, all with motives to harm their host. To everyone’s surprise, two uninvited guests appear.

The first is a young woman who claims to be Dane’s daughter. The second party-crasher is the Angel of Death who comes in the form of a ruthless killer who murders one of the guests.

Faith must find the fiend and stop him before he can kill again.

Katherine Hall Page sets the perfect place-setting for murder in this clever mystery which pays homage to her love of theater and mystery films, evoking such classics as “Murder by Death”, “Clue” and the great “And Then There Were None” by the great lady of mystery Agatha Christie.

As in her past, the author dishes up some wonderful recipes to match the theme of the Dane’s disastrous play, “Heaven or Hell” with such treats as “Fallen Angel Cocktail”, “Deviled Eggs” and “Angel Food Cake” to name but a few.

Katherine Hall Page has given her Faith Fairchild readers another delicious course in this culinary mystery series.