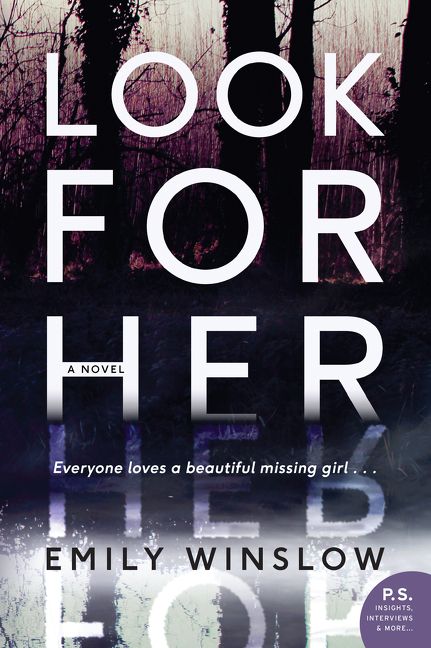 Emily Winslow’s “Look for Her” (William Morrow Publisher, 278 pages) is a very tense crime drama told from the point of view of the main characters as they deal with the circumstances surrounding the disappearance of a teenage girl.

In 1976, in the tiny English hamlet of Lilling, which lies just outside of Cambridge, a young girl named Annalise Wood disappeared while riding her bicycle home from school.

Years later, the remains of a young girl were discovered in a shallow grave, but Annalise’s killer was never caught. The sensational case of the beautiful teenage victim, Annalise Wood, has taken on a certain urban legend status.

Decades after the disappearance of Annalise Wood, Dr. Laurie Ambrose, a counsellor at Cambridge, is approached by a woman, Annalise Williams, who claims to have been named after the murdered girl. Dr. Ambrose discovers that this woman has an unhealthy fixation with Annalise Wood.

Moreover, this disturbed woman claims to have been a rape victim to elicit sympathy from young men. The doctor becomes alarmed when she discovers that this woman who calls herself Annalise Williams is not who she claims to be, and worse yet, this manipulative woman is dating her son, Blake.

In the midst of this drama, Dr. Ambrose is contacted by yet another woman who has a strange connection to the victim Annalise Wood. This woman, Hannah-Claire Finney, claims to be the lost daughter of the murder victim, Annalise Wood.

Things take a sinister turn when Hannah-Claire Finney, the supposed daughter of Annalise Wood, dies unexpectedly after falling off a bridge and drowning. What are the odds that both a mother and daughter should die violent deaths?

Dr. Laurie Ambrose is compelled to cooperate with cold case investigator Morris Keene and Chloe Frohmann, a police detective on maternity leave, as they try to uncover what really happened to these tragic women, Annalise Wood and Hannah-Claire Finney.

“Look for Her” is Emily Winslow’s well-drawn psychological thriller based on an old unsolved case and how this crime resonates among the community decades later.