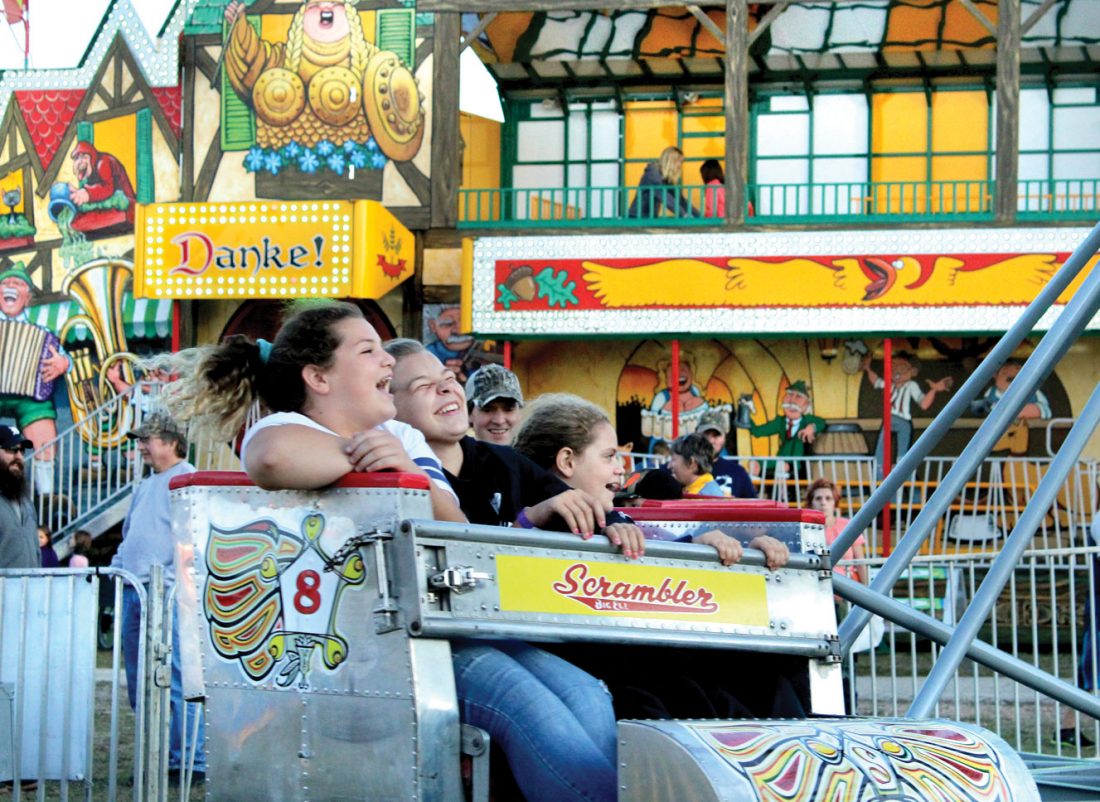 FROM LEFT, AYLA GRAILER, Haylee Kelley and Zada McClaren, all of Norway, ride the Scrambler at the Skerbeck Carnival on Thursday evening at the Dickinson County Fair. (Theresa Proudfit/Daily News photo)

Skerbeck Family Carnival generated $61,000 in fair revenues, representing 30% of carnival receipts, he told the county board Monday. That’s up from a previous high of $53,000. Saturday set a one-day record for the Labor Day weekend event, although overall attendance and revenue numbers aren’t yet final.

Degenaer, a county commissioner from Norway and longtime fair volunteer, said he’d welcome the same temperatures for years ahead. “It was nice but not too hot,” he said. “You couldn’t ask for better weather.”

The grandstand attractions, including a demolition derby, stock car races and free concert, all came off well, Degenaer added.

The city of Norway’s public utilities department was recognized as a major sponsor for its work in installing underground electrical service, making Dickinson County the first in the state to achieve this fairgrounds safety upgrade.

— Learned the overall cost of employee health insurance through Blue Cross/Blue Shield is expected to rise by 2% in 2020. Controller Brian Bousley said he’s pleased with that figure, considering premiums were down nearly 10% this year.

— Received an update from Sheriff Scott Rutter on a planned Victim Services Unit that may be up and running next week. Seven volunteers will receive Michigan Sheriff’s Association training in Escanaba this weekend to staff the new county unit, which will help families and individuals deal with crisis. More volunteers could receive training in Dickinson County at a later date, he said.

— Learned from Rutter that six applicants will be interviewed soon to possibly provide cooperative support to the Delta County Dive Team in responding to Dickinson County emergencies.

— Considered a request from David McCash, president of the Iron Mountain-Kingsford Rotary Club, to give the club exclusive rights to host an annual stair-climbing event at Pine Mountain. The inaugural Pine Mountain 500 in August drew more than 200 runners and 500 to 600 are expected in 2020, he said. The club wants to make sure the event — named in recognition of the 500 steps on the ski jump’s landing hill — remains a unique draw as it attracts national attention. Stevens said he supports the concept but added the county will need legal advice. The ski jump property is owned by the county.

— Received an inquiry from Ben Peterson of Quinnesec, representing the off-road vehicle club UPROAR, about possible modifications to rules for operating on county road right-of-ways. ORVs must be as far to the right as practical on county roads that are open to use, but Peterson said it’s often safer to be entirely on the paved portion at a higher speed. Rutter explained that the maximum 25 mph speed is established by the state. A county ordinance could be amended to address other issues as merited, the sheriff said. The cities of Iron Mountain, Norway and Kingsford all have their own rules for ORVs on streets, he added.

— Approved $550 for the Upper Peninsula Travel and Recreation Association.